Russia is faulted for deliberate destruction. What about Azerbaijan, Turkey, Libya and China? 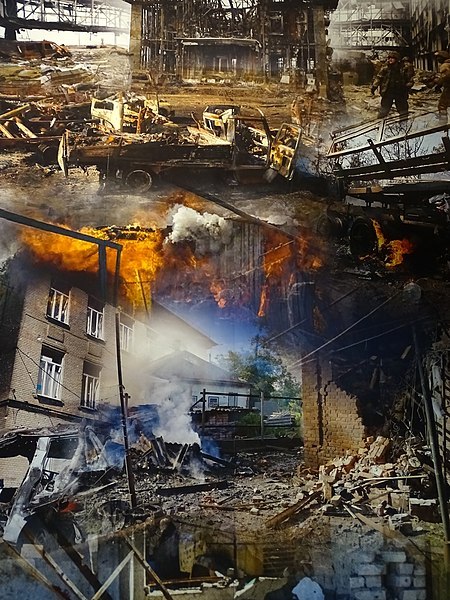 Collage of photos from 2014-15 War in Eastern Ukraine, Museum of History of WW2, Kiev, photo by Adam Jones from Kelowna, BC, Canada, CCA-SA 2.0 Generic.

“Unfortunately, the rules developed and adopted by all ICOM members no longer work.”  Letter from ICOM Ukraine to the Prague general meeting, August 2022.

The International Council of Museums, the world’s largest museum organization, met in Prague August 20-28, 2022. The meeting’s theme was “The Power of Museums,” focusing on museums’ interaction and support for civil society in a time of global pandemic and environmental crisis. Among the meeting’s achievements was the issuance of a more reality-based definition of an idealized museum that was not, primarily, a “polyphonic space for critical dialogue,” as an earlier definition had it.

Most importantly, ICOM took the first steps to acknowledge that supposedly responsible national governments do engage in the pillage and destruction of cultural heritage (sometimes their own) and that the international community has a duty to call them to task for it.

Condemnation of Russia for destruction of cultural heritage in Ukraine. 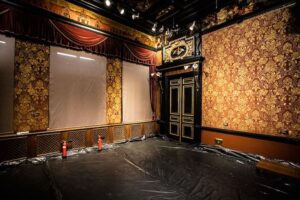 Khanenko Museum in Kyiv during the 2022 Russian invasion of Ukraine. The paintings are taken off the walls and moved to shelters. Photo Kyiv City State Administration, Oleksiі Samsonov, 13 April 2022, CCA 4.0 International.

ICOM’s most noteworthy action was to openly criticize its member nation, the Russian Federation. The executive board called for a “protocol to address conflicts” as part of ICOM’s revision of its Code of Ethics for Museums. ICOM issued its most forceful statement so far condemning Russia:

“ICOM strongly condemns the deliberate destruction of Ukrainian cultural heritage by Russia and reminds it of its obligations as a State Party to the 1954 Hague Convention for the Protection of Cultural Property in the event of armed conflict and its First Protocol.”

The board’s unanimous decision was announced at ICOM’s General Assembly. However, ICOM’s Ukraine delegation was not successful in obtaining its goal of termination of Russia’s membership in ICOM.

Anastasia Cherednychenko, representing ICOM’s country organization in Ukraine, delivered a scathing statement in which she accused Russia of “cultural genocide” and called for ICOM Russia to be expelled. Russian museum workers have actively participated in removing objects from Ukrainian collections and taking them to Russia. (See Russia’s War Against Ukrainian Culture, CPN, August 2, 2022.) In a letter to ICOM, representatives of Ukraine’s Ministry of Culture made clear that asking Russia to follow the rules would be useless.

“Unfortunately, the rules developed and adopted by all ICOM members no longer work. Silently watching the aggressor’s actions or merely expressing concern does not help; moreover, that gives the green light to those who might be tempted to violate the rules in the future.” 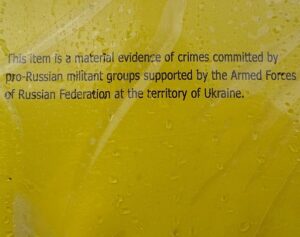 This is not the first time Russia’s actions following its invasion have been raised. ICOM United States had issued a statement in February 2022,  offering assistance to Ukrainian colleagues and reiterating its commitment to the Blue Shield organization’s expression of deep concern for threats to heritage during conflict, including politically motivated threats. (This was before the Ivankiv Museum was shelled on February 25, but the Kyiv History Museum’s storage rooms were looted of 18th century porcelain and other objects during a night of protests in February 2014.)  But ICOM actions have stopped short of specifically blaming Russia.

ICOM is intending to issue a Red List of Cultural Objects at Risk for Ukraine in the near future. The online publication of records and photos of objects stolen from Ukrainian museums by Russian forces might be a more useful step in gaining the return of objects.

ICOM Russia did not attend the Prague meeting. An ICOM spokesperson later delivered a bland closing press statement regarding ICOM’s duty to unite, nurture, and support the museum community by promoting dialog and peaceful interactions. Yet if the guardians of culture fail to recognize cultural destruction perpetrated by member nations on their own citizens, denying access to culture, language, and freedom of expression, as is happening under authoritarian regimes around the world, they are missing the point. If Russia is condemned for its deliberate destruction of the cultural heritage of another nation, then Azerbaijan, China, Turkey and other nations are equally culpable for the destruction of their own and neighboring people’s heritage. 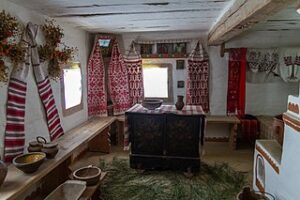 Over the last three years, the drafting of an updated definition of ‘museum’ has caused considerable internal strife at ICOM in which a number of ICOM executive board members resigned.

“Museums are democratising, inclusive and polyphonic spaces for critical dialogue about the pasts and the futures. Acknowledging and addressing the conflicts and challenges of the present, they hold artefacts and specimens in trust for society, safeguard diverse memories for future generations and guarantee equal rights and equal access to heritage for all people. Museums are not for profit. They are participatory and transparent, and work in active partnership with and for diverse communities to collect, preserve, research, interpret, exhibit, and enhance understandings of the world, aiming to contribute to human dignity and social justice, global equality and planetary wellbeing.”

A number of museums expressed their dissatisfaction with this definition, noting that excluded both education and the concept of a collection entirely. After a new Working Party was established and last February, ICOM circulated 5 alternative definitions of more moderate tone. The more comprehensible, newly adopted 2022 definition is:

“A museum is a not-for-profit, permanent institution in the service of society that researches, collects, conserves, interprets and exhibits tangible and intangible heritage. Open to the public, accessible and inclusive, museums foster diversity and sustainability. They operate and communicate ethically, professionally and with the participation of communities, offering varied experiences for education, enjoyment, reflection and knowledge sharing.”

Panorama of Exhibit on Occupation of Ukraine, Museum of History of WW2, Kiev, photo by Adam Jones from Kelowna, BC, Canada, CCA-SA 2.0 Generic.