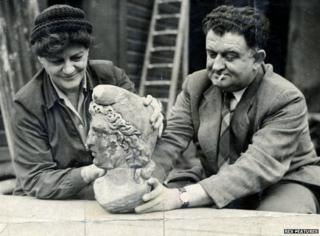 1954 discovery of the Temple of Mithras.

The earliest manuscripts in Britain, dating from 43 AD/CE to around 80 AD/CE, were discovered during a Museum of London Archaeology (MOLA) excavation at the three-acre London construction site for the new European headquarters of Bloomberg, the international financial news and information company. Archeological workers unearthed 405 waxed wood tablets from the excavation site of the new Bloomberg headquarters in 2013 and 2014, but the writing on the tablets was kept secret while researchers worked painstakingly to decipher the Latin texts.

Now, 87 tablets have been translated by Dr. Roger Tomlin of Wolfson College, Oxford. The wax coating on the tablets had long since disappeared, but the writing was made legible through modern restorative technologies that brought ink traces and surface scratches to light. The tablets survived almost 2000 years only because the wood and elements of the inked texts were constantly wet, sunk in mud-sodden ground east of St. Paul’s Cathedral, where the subterranean river Walbrook runs.

Although many Roman period inscriptions remain extant, these are usually stone-cut funerary texts and official proclamations with formal texts. Though historically important, stone inscriptions are often repetitive and generally follow formulae, memorializing an official by naming his public offices or spelling out proclamations and regulations. 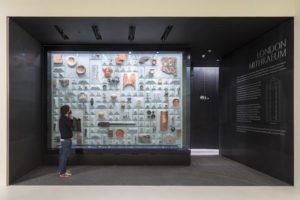 The wooden tablets discovered at the Bloomberg site instead record individual financial matters and illustrate the lives of ordinary Roman and British citizens.

A text dated 8 January, 57 AD/CE is one of the earliest manuscripts ever found in Britain; it is a record of a debt of 105 denari (about £10,000 in modern equivalent). Others describe the lives of a brewer, a freight hauler, a freed slave, a food seller, an innkeeper, a lieutenant colonel, a barrel maker, one of the Roman governor’s bodyguards, and even a slave. One letter begs for a desperately needed loan, another complains about his draft animals that were seized by another man.

The tablets also indirectly cast light on the actual dates of historical events. Researchers say that the thriving condition of the city in October, 62 AD/CE, when a transport hauler was engaged in bringing “20 loads of provisions at a transport charge of one quarter denarius for each” indicates that the London was an active trading city again after its destruction by Queen Boudica’s revolt – and scholars think that this letter shows Tacitus’ date of AD 71 for the revolt to be later than it should be.

The texts will eventually be displayed at the headquarters, along with an actual temple of Mithras. Originally thought to be the foundations for an early church, investigations showed it had been built in the 3rd century in London’s Walbrook region as temple of Mithras and possibly to other gods popular with Roman soldiery.  The temple site then appeared to have been rededicated to Bacchus in the 4th century.

The temple was discovered as part of excavations of central London that took place prior to rebuilding areas bombed in WW2. The finding of the Mithras temple was an exciting archeological discovery and for most Londoners, their first experience with archaeology. The most dramatic find was of a fine head of the god Mithras, wearing the distinctive Asian cap. In the fifties, however, archaeological preservation was given less importance than today, and much of the site was dug out and put in storage. A part of the site was moved to Temple Court, Queen Victoria Street, where it was reconstructed in a way that contemporary archaeologists found inaccurate.

The original find site of the temple is now part of the area of the Bloomberg project. Bloomberg purchased the entire temple remains from the Temple Court project and has worked painstakingly to move and reintegrate the Temple Court project back into its original location, some 40 feet beneath the surface.  The new reconstruction, deemed ‘The London Mithraeum,’ will sit within the Bloomberg development in a publicly accessible exhibition space.

Images: Top: Discovery of the head of Mithras; Bloomberg tablet 30: ‘I ask you in your own interest not to appear shabby,’ dated to CE 43-53. Image credit: Museum of London Archaeology; Relief sculpture of the god Mithras, Museum of London.