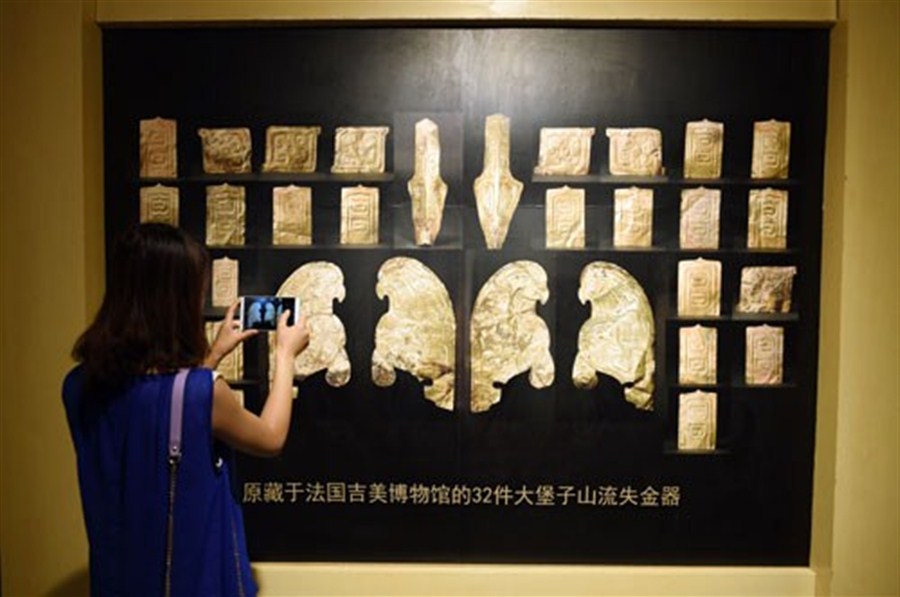 A July 2015 exhibition at the Gansu Provincial Museum in Lanzhou, China showcased a repatriation from France to China that took place at the expense of a Paris museum. The French government, acting through cultural minister Fleur Pellerin, “facilitated” the repatriation of a collection of gold plaques and harness decorations to China. The collection was originally donated by two major collectors of Asian art to the Musee Guimet in Paris. Chinese cultural officials urged France to send the artworks to China; asserting that they had been pillaged from an archeological site.

The owners of the artworks were Paris art dealer Christian Deydier and billionaire François Pinault. Pinault’s Kering conglomerate owns Christie’s as well as high-end fashion houses. Deydier had purchased some of the collection from a Taiwanese art dealer, and then later, in the 1990s, from the dealer’s widow. Fifteen years before, former President Jacques Chiraq had talked Pinault and Deydier into making the collection a gift to the Guimet.

Despite having agreed to return the pieces, an angry Deydier said that the French government had “dropped its trousers” to curry favor with the Chinese. “It’s France’s heritage which is suffering,” he told Agence France Presse, denouncing what he called an improper legal process and “an export on the sly.”

The Art Newspaper reported that, “Under French law, public collections are inalienable property; donations especially are “irrevocable” and the status of the work offered can only be changed by a parliamentary vote, as was the case when France gave back 20 Maori heads in 2012 to New Zealand. In the case of the Guimet works, the government was afraid that the process would take too long and irritate the Chinese.”

Nonetheless, the ministry made a reversal of the donation possible, allowing Pinault and Deydier to retroactively nullify their donation. The items were then returned by the museum to Pinault and Deydier, who had agreed to immediately offer the pieces to the government of China. A joint Franco-Chinese expert panel determined that there were physical similarities between the Guimet gold collection and items recovered during a massive looting of multiple sites in Gansu by farmers and others between 1993 and 1996. The same Art Newspaper article notes that the report carefully avoids any discussion of the Chinese army’s role in the 1993-1996 looting of more than 140 sites. China asserts that the items came from tombs in Dabuzishan in Gansu’s Lixian County and date to 770-476 BC.

Mr. Pinault previously gifted two zodiac heads that had been removed from the Yuanming Yuan Summer Palace to China, after they were bid up to twenty million dollars apiece at a Christie’s auction by a Chinese bidder who then refused to pay. The zodiac heads were from the Yves St. Laurent-Pierre Berge collection. Pinault’s companies have significant business interests in China.