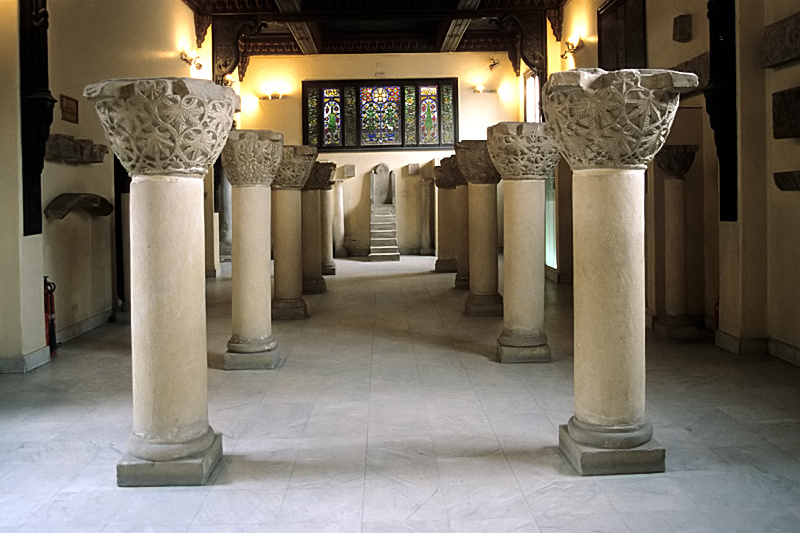 A little known Coptic museum in Egypt would like more visitors, more money and a better security system.

Egypt’s disorganized museum and antiquities cultural management system has left a small museum dedicated to Egypt’s Coptic heritage barely hanging on. Cairo’s Coptic Museum holds one of the largest collections of Coptic artifacts in the world, but it is overshadowed by the more glamorous and popular museums dedicated to Egyptian Pharaonic history. While over a billion dollars has been spent on Egypt’s new Grand Egyptian Museum (75% of the funding provided through loans from Japan), less favored museums have been left behind.

The Copts are an ethno-religious group in Egypt who were converted to Christianity by St. Mark, in Alexandria not long after the crucifixion of Christ, around 33AD. As such, they were one of the earliest Christian communities in the Middle East. The Copts played an important role in the spread and development of Christianity, influencing Christian education as well as monastic and doctrinal development.

Over the centuries the Copts have experienced varying levels of persecution in Egypt. They were tolerated under Roman rule until AD 284 when many were put to death by the emperor Diocletian, resulting in a movement into the desert by Christian communities and the birth of monasticism. Roman persecution failed to eradicate Christianity and instead galvanized it, leading to the organization of the Coptic Church.

By the 4th century CE, most of Egypt’s population was Christian. After the Muslim conquest in 639 CE, Christianity was slowly replaced by Islam.

Copts represent somewhere between 10-20% of the population of present-day Egypt. Although Egyptian law protects freedom of belief and religious practice, in reality these freedoms are severely curtailed. Islam is the official state religion. Islamic law is the source of legislation. Heresy is illegal. It is also illegal to convert from Islam to another religion. Observers note that the rights of Copts and other minorities are frequently suppressed in favor of the Muslim majority. 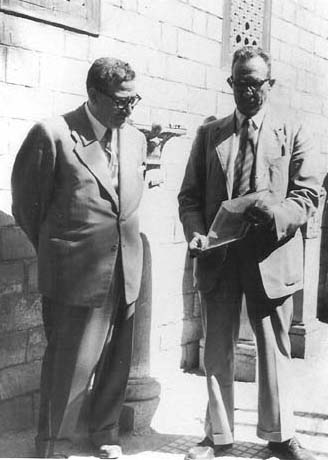 Pahor Labib with Henry Kissinger in the garden of the coptic Museum, Pahor showing a preserved page of the Nag Hammadi Library. Wikimedia Commons.

Marcus Simaika Pasha (1864-1944) founded The Coptic Museum after rescuing silver Coptic gospel covers and church vessels from a silversmith’s fire. From these initial artifacts, and under the approval of Pope Kyrillos V, a small space was set-aside in the Al-Muallaqa Church in 1908 for collection and display of artifacts. The Pope also lent his authority in the collection of objects from Coptic Churches and monasteries throughout the Nile valley.

Under Marcus Simaika Pasha’s direction, and with a limited budget, the museum slowly grew. A formal visit by Sultan Fouad in 1920 brought international attention to the museum. Subsequent visits and communication solidified the relationship between the Sultan and the museum. Over the next few years, after negotiations between the Papacy and the Sultanate, the museum became a national museum under the Department of Antiquities. Coptic objects in the national museum were transferred to the Coptic Museum under this new arrangement, and a new wing was built in 1947. A collection of Coptic artifacts acquired by French Egyptologist, Gaston Maspero, was also incorporated into the collection.

According to Dr. Donald Malcolm Reid of Georgia State University, writing on the Coptic Cairo website, “Simaika’s Coptic Museum helped awaken both Copts and Muslims to the critical link the Coptic Church and community had played in linking ancient Egypt on the one hand to Islamic and modern Egypt on the other. The museum continues today as a critical landmark for both Coptic communal and Egyptian national consciousness and identity.”

In 2001 the museum was closed for a $5.4 million major renovation. It reopened in 2006. Currently the 27-room museum houses over 18,100 icons, carved stone, wood and metal work, manuscripts, textiles, pottery and frescoes.

In an interview with George Mikhail of Al-Monitor, Atef Naguib, the general manager of the Coptic Museum, stated that the museum had many budgetary and security challenges in continuing to protect and promote Egypt’s Coptic heritage. Naguib said that malfunctioning closed-circuit TV security cameras had already led one security guard to attempt to leave the museum with artifacts, something the guard admitted during prosecution investigations. Additional space is also needed to adequately store and display the vast collection and new acquisitions.

Perhaps the museum’s biggest concern is its lack of advertising. People do not know it exists, despite the fact the museum is surrounded by other historic and cultural attractions.

The Coptic Museum is located at: No 4 Fakhry Abd el Nour street | Abbassia, Cairo 11511, Egypt.  Tickets for the museum and a tour of Coptic Cairo can be purchased online and through various venues.