Dutch Court: Scythian Gold from Crimea Should Go to Ukraine 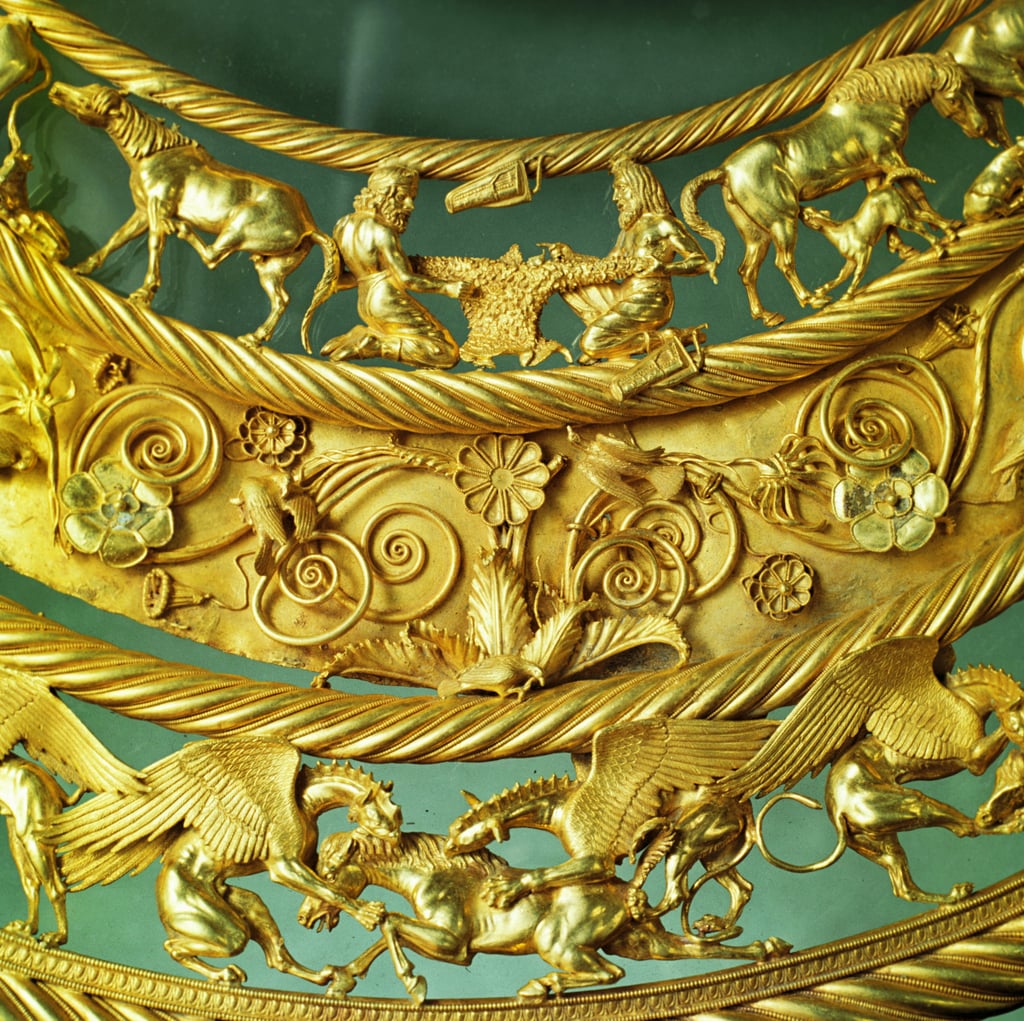 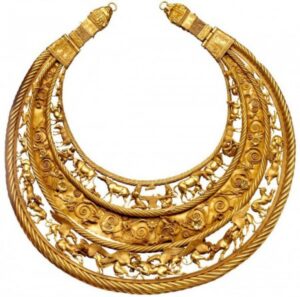 Gold torque with griffins, shepherds. Part of the original exhibition, possession of this great Scythian gold pectoral is not contested. It has been returned to the Kiev Museum of Ukranian Art, Kiev, Ukraine. Photo Allard Pierson Museum.

In February 2014, the Allard Pierson Museum, the University of Amsterdam’s highly-regarded archaeological museum, opened a special exhibition of ancient artifacts from the Black Sea region. The objects were on loan from four different museums in Crimea and one museum in Kiev. The exhibition, The Crimea: Gold and Secrets from the Black Sea, included a wide range of artifacts, from Scythian goldwork to a Chinese lacquer box (which arrived in Crimea along ancient trade routes). The Scythian gold material in the exhibition included some of the most extraordinary and beautifully executed artworks known from the Scythian world. The exhibition was scheduled to be brief and the museum planned to return the objects just a few months later, in May, but it was extended due to uncertainty created by the Russian Federation’s invasion of Crimea, which began in late February 2014.

The Allard Pierson Museum then announced that it was not preparing to return the artifacts, because the conflict in Ukraine had produced multiple claimants for them. Both the Ukrainian and Russian governments declared themselves the rightful owners. The Russian claim was based upon its control of the Crimea, where the lending museums were located, as well as claiming cultural affinity with the ancient cultures which created the objects. Ukraine likewise held that it had the primary historical connection to the objects because the museums were under Ukrainian governance at the time of the loan and in any case, Russia’s claim to Crimea was illegitimate, the product of an unjustified invasion.

The loan agreements between the lending museums and the two museums to which the objects travelled describes the loaned objects as part of the “Museum Fund of Ukraine.” The agreement includes a statement that the receiving museums “realize that the exhibits of the exhibition are the property of Ukraine and world civilization and shall take all possible measures to avoid their loss and damage.” ( Evelien Campfens and Irina Tarsis, CRI-ME-A-RIVER! Crimean Gold in the Crosshairs of Geopolitics, IFAR Journal, Vol. 18, No. 1, 2017, 40) Andrey Malgin, Director of the Tavrida Central Museum in Simferopol, Crimea, which lent 132 objects to the Amsterdam exhibition, took a different position. Malgin told Al-Jazeera in 2014 that “museum property is primary and more fundamental than the property of the state,” and that the objects are neither Russian nor Ukrainian, but historically and inherently Crimean. (The Autonomous Republic of Crimea became part of independent Ukraine in 1991.) He said that the objects should be returned directly to the lending museums, and not into the custody of either the Ukrainian or Russian governments.

At the time, Russian-Dutch relations were already strained. The year before, four Dutch citizens had been jailed in Murmansk for allegedly disseminating gay propaganda, an act which is illegal in Russia. In October of 2013, a Russian diplomat in the Hague had been briefly arrested on child abuse charges; a Dutch diplomat holding identical rank was physically assaulted and beaten in Moscow by unidentified assailants a few days later. The most serious Russian-Dutch diplomatic crisis came soon after the museum’s announcement that it would retain the Crimean gold exhibition: the shooting down of Malaysian Airlines flight MH17 over rebel-held Ukrainian territory on July 14, 2014. A Dutch-led joint investigation team determined that the crash, in which more than a hundred Dutch citizens lost their lives, was caused by the firing of a Buk surface-to-air missile fired from pro-Russian separatist controlled territory in Ukraine.

The original lending museums were the National Park of Tuarisch Chersonesos, the Kerch Historical and Archaeological Museum, the Tavrida Central Museum and the Bachtsjisaraj History and Culture State Park. The three parties filed briefs regarding ownership of the almost 500 objects loaned by the Crimean museums just prior to the Russian annexation. Russia’s claim was based on the fact that the lending museums are on soil now annexed by Russia, and therefore the artifacts should be returned to the original lending museums. The Ukraine government stated that Ukraine has the primary historical connection to the artifacts and that the museums were under Ukrainian governance at the time of the loan.

On December 14, 2016, the Dutch judges ruled that the objects “must go to Ukraine, the artifacts’ country of origin and cultural heritage,” and that the Crimean claim be denied because Crimea was not a sovereign state. The court held that in Ukraine, museum collections are considered to be the property of the state and not of individual museums. The museum was obliged to return the gold to Ukraine, the State Party under the 1970 UNESCO Convention that the Dutch Heritage Act implemented. (“Act of December 9, 2015, Relating to the Combining and Amendment of Rules Regarding Cultural Heritage.”) However, the court declined to rule on the rightful owner of the collection, leaving it for Ukrainian courts to decide the matter upon the artifacts’ return.

In a 2017 IFAR article discussing the case, Evelien Campfens and Irina Tarsis wrote that:

Russian officials expressed outrage at the 2016 ruling in favor of Ukraine’s claim. Crimean Culture Minister Arina Novoselskaya announced that Crimea’s museums would appeal the Dutch court’s decision, taking that step in January 2017. Not all museum officials in Russia agreed; Yelena Gagarina, of the Moscow Kremlin Museum, said at the time that “the objects were taken out of Ukrainian territory and belonged to Ukraine as a state.” The Russian/Crimean case at the Dutch appellate court has now failed. On October 26, 2021, the presiding judge, Pauline Hofmeijer-Rutten, ruled that Ukraine had legal control over the loaned objects from Crimean museums, based on its 1995 Law on Museums and Museum Affairs. (Decree on the basis of Art. 15 para. 3 of the Law of Ukraine on Museum and Museum Affairs of 29 June 1995.)

Seven years after the exhibition opened at the Allard Pierson Museum, Andrei Malgin is still angry. “I lack words to express my indignation,” he told Tass, describing the decision as a manifestation of “double standards” and a “disgusting decision.”

There is yet another opportunity for Russia’s claim to be heard by the Dutch Supreme Court. Until an appeal is decided upon, the objects will remain in storage in Amsterdam.