Cowan’s has a history of working with tribes to return sensitive materials when receiving them in a consignment for auction. Company specialist and director of Cowan’s Native American, prehistoric and tribal art department, Danica Farnand, immediately recognized a 15-inch-long carved object included in a recent consignment as Zuni. The wooden figure had been part of a traveling show of Native American artifacts in the southeastern U.S. in the 1930s to 1950s. The owner of the show, who claimed to be Cherokee, had died many years before, passing the collection to a friend in Ohio and the auction house received the consignment from the friend’s estate on his decease.

Farnand reached out to the consignor and explained that, “The Zuni recognize the war gods as living beings, and their removal from the shrine where they live represents an affront to Zuni cultural traditions.” She said that the consignor was happy to agree to the return when they understood the importance of such figures to the Zuni. Two such figures are carved each year and left outside on hillside ceremonial sites to naturally decay.

“This was a no-brainer for us,” said Wes Cowan, founder of the eponymous auction company. “While I’ve been in the auction business for nearly 25 years, I also have a Ph.D. in Anthropology, was an academic, and a museum curator for 11 years. I’m probably better equipped than most to straddle the worlds of legitimate collecting and respecting the sovereign rights of Native Peoples. When Danica Farnand discovered the Ahayu:da in a collection consigned to us, she knew what to do.”

He continued, “In the last few years, we’ve helped facilitate the return of a number of Puebloan case masks that were part of a New York collection. Ironically, some were found to be elaborate fakes, but the Pueblo officials were happy to take them out of circulation and destroy them. From our perspective, ATADA’s Voluntary Return Program has been a huge success.”

“At the same time, we’ve seen at least three tribes recognize the importance of non-sacred items we’ve offered by bidding in our sales. They haven’t always been successful, but by bidding it is clear that they recognize the legitimacy of our auctions.”

The Zuni have worked to recover approximately one hundred such figures since 1978, many being returned by museums after passage of the 1990 Native American Graves Protection and Repatriation Act (NAGPRA) under which museums that receive federal funding are required to document and return both human remains and sacred cultural artifacts needed for current religious activities to Native American, Native Alaskan and Native Hawaiian entities. Lawfully owned objects in private hands are not subject to NAGPRA.

After obtaining consent from the consignor, Farnand contacted Robert Gallegos, an Albuquerque art dealer and ATADA Board member who created its Voluntary Returns Program, to ask him to reach out to the Zuni tribe to arrange for its return. 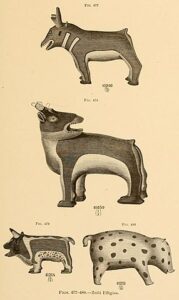 Since the ATADA Voluntary Returns Program was established in 2016, ATADA has returned over 300 sacred objects to Native American tribes. The group has also brought a number of sacred items back to indigenous peoples outside of the U.S. The supervision of sacred items in pueblo tribes is generally in the hands of elders, who are the most expert in religion and traditional practices. ATADA looks to tribal elders for advice on the origin of objects in cases where similar items could come from several different tribes and for direction on the most respectful means of effecting returns.

Gallegos contacted a Zuni elder to inform the tribe about the war god and arranged to hand deliver it to Zuni tribal lands as directed. This return is one of many made to the Zuni by Gallegos, who has many contacts among the tribes and has worked for years to build trust. He has an extensive library of early anthropological writings that can assist in identifying objects that tribes may want returned, but he relies on the direction and wishes of tribal elders in actually seeking items out. ATADA has returned dozens of masks to Southwestern Native Nations, has brought back over a hundred jish and other ceremonial items, a number of altars, and recently returned a 6-foot-tall, 10-12 foot long screen to the Navajo. Gallegos stresses that while ATADA is a dealer and collector organization, many members are deeply involved in the study and appreciation of Native culture, and they respect the right of self-determination for the tribes. ATADA’s goal is to follow the direction of the tribes to bring the things back to them that are most important, however they have been acquired.

Gallegos noted that the Zuni want such powerful items back not only for the sake of the tribe, but also because if mishandled, such objects can negatively affect not only the non-Zuni holding the item; they can create a imbalance in the world at large.

Kim Martindale, ATADA’s President, said in a statement that:

“This Zuni War God is just one of over 300 items that the Authentic Tribal Art Dealers Association has helped to return to sovereign Native Nations. ATADA has also worked on a number of returns of objects to indigenous communities globally. As an organization, the Authentic Tribal Art Dealers Association has pursued an open dialog with Native Nations and indigenous communities in order to return essential cultural items to them on a purely voluntary basis. The items that have been returned were purchased legally. However, as our understanding developed, our art dealer members and many collectors have grown to understand how important these items are. We recognized the need to return key cultural items regardless of their legal status and that’s why we started the Voluntary Returns program. We’ve also incorporated descriptions of items that are not appropriate to trade in into our organization’s Bylaws. Our commitment to work with all Native Nations and indigenous communities is clear. We want to ensure that the Native American art market remains a viable and flourishing one for both Native artists and promoters of authentic indigenous items and that it continues to work to safeguard and preserve cultural treasures.”

“We’re happy to enter into constructive dialog with Tribal Historic Preservation Officers (THPO) or other designated tribal officials. Our catalogs are always available online before an auction. We invite THPOs to examine them carefully before a sale, and if they find something objectionable to contact us. We may not always agree, and there have been times when we refused to withdraw an item, but our experiences have uniformly been positive. We’ve found that respectful communication is a key to understanding – on both sides.”

“Most collectors want to do the right thing. In those instances where potentially sacred items have been found in private hands, in every case the collector has insisted it be returned. This is a logical outcome. Most collectors have a deep and abiding respect for the makers and tradition of the objects they preserve.”

This article has been updated.