Hobby Lobby, the Antiquities Mess and Need for Reform 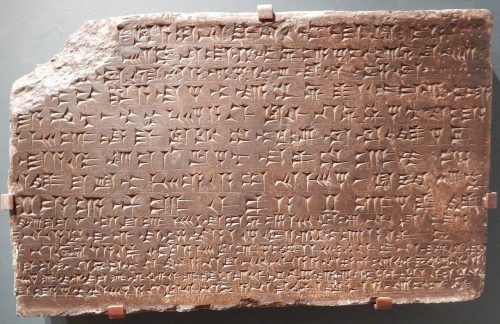 Fragment of a stone relief in the Northwest Palace, carved with the 'standard inscription' that records the king's names, titles and ancestry in Assyrian. This part relates to Ashpurnasirpal's conquest of lands from Uratu to the mountains of Lebanon. ANLOAN109.1 By BabelStone (Own work) [CC BY-SA 3.0 (https://creativecommons.org/licenses/by-sa/3.0)], via Wikimedia Commons.

Hobby Lobby’s settlement of charges stemming from its purchase of Near-Eastern antiquities has once again cast a harsh light on the antiquities trade and called into question the legitimacy of the entire field of antiquities collecting. Our law firm represented Hobby Lobby in the settlement. Over the last 20 years, we have extensive experience representing clients in the art world generally and the antiquities field in particular. In our view, criticism of the Hobby Lobby settlement misses certain important points while underscoring the urgent need for legal and market reform.

First, we view the prospective compliance regime adopted by Hobby Lobby as progressive. For the first time, future acquisitions by a major private collector must be made in conformity with best-practices in the trade and museum communities. Thus, Hobby Lobby has adopted internal policies and procedures governing its importation and purchase of cultural property, provide training to its personnel, hire qualified outside customs counsel and customs brokers, and submit quarterly reports to the government on any cultural property acquisitions for the next 18 months. The Hobby Lobby compliance regime is a sophisticated response to a complex problem and, frankly, could serve as a model for other institutions.

Second, the origin and ownership of antiquities are often unknown and unknowable. This complicates even good faith efforts at legal compliance in the antiquities market. Unlike other categories of personal property, such as real estate, cars and boats, there is no title registry or transfer records for artwork. Most private owners fail to document their ownership through photographs, receipts or other records. Export compliance cannot be determined. This lack of historical documentation is a problem endemic to the art world in general and to antiquities in particular. The demand for well documented provenance is recent, retroactive, and has clouded the ownership of objects that have been lawfully owned and traded for decades or centuries outside their country of origin, which cannot always be determined. Simply assuming that all unprovenanced antiquities are looted is contrary to reality and common sense, and turns otherwise lawful objects into unmarketable “orphans.”

The antiquities field is troubled and contentious. Source nations, archeologists and enforcement agencies advocate for national retention and universal restitution. Dealers and collectors, who are only partially aligned, advocate in favor of some sort of lawful market, although they have generally failed to articulate, adopt and enforce clear standards as to what material they will and won’t handle. Responsible dealers and collectors will not handle material that they know is looted and are careful to research provenance. However, even the most diligent research rarely reveals more than two or three generations of documented prior ownership. Auction houses and museums sit uncomfortably in the middle, torn by the desire both to handle good material and to wash their hands of objects lacking a clear, lengthy, and well-documented provenance. This probably disqualifies 70% to 80% of all cultural material in private hands for auction consignment or museum loans under current due diligence standards. Although the current inventory of responsible dealers is generally well-provenanced, collectors and museums are often left holding under-provenanced material acquired before standards tightened, and such material is now difficult to gift, sell or exhibit.

The national and international legal system regulating the global antiquities trade is inadequate to serve the persuasive ends of any constituency and is, from any perspective, broken. A fresh approach to the international antiquities market is needed. We propose the adoption of a new system whereby objects can be voluntarily and anonymously listed on a central, universally accessible database with known information about provenance. Three years after listing title would be deemed free and clear and the object could be traded without claim or penalty. Any claims brought before then would be resolved fairly and frivolous claims would be penalized. Any claims brought after must be based only on information that was not previously available. Transparency should merit repose. This system would be consistent with existing “safe harbors” in U.S. law for museums and good faith purchasers, and would restore balance and integrity to the antiquities trade, the field of collecting, and the related regulatory regime.

The views expressed in the Commentary above are solely those of the authors and are neither endorsed nor expressed by or on behalf of CCP.