Collaborative Exhibit at LACMA – Fiji: Art & Life in the Pacific 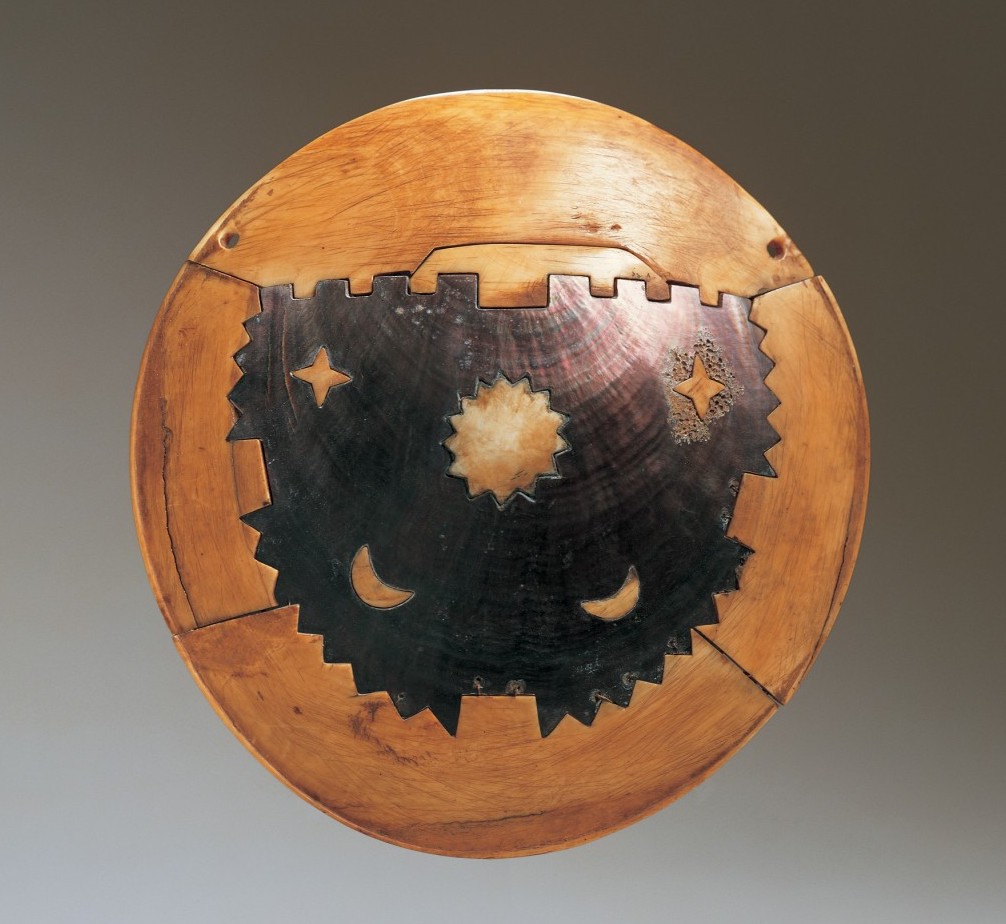 Fiji: Art & Life in the Pacific will be at the Los Angeles County Museum of Art through July 19, 2020.

A much-heralded exhibition of the art of Fiji, originally organized by the Sainsbury Centre in England, opened in southern California at the Los Angeles County Museum of Art with a meke, traditional storytelling through dance and song. Celebrants included Prime Minister Frank Bainimarama and other top officials from Fiji, American, British and Fijian scholars and major American private collectors of Melanesian art. The spectacular LACMA exhibition was 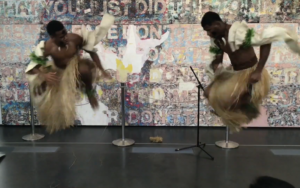 With Prime Minister Frank Bainimarama of Fiji in the audience, a group performs meke, or traditional story-telling through dance and song, at LACMA. Screenshot, video courtesy LACMA.

the first comprehensive U.S. exhibition of the art and culture of Fiji, which has been relatively rarely exhibited. The exhibition brought together 280 works from the Museum of Archaeology and Anthropology at Cambridge University, the Fiji Museum in Suva, the British Museum, the Smithsonian, the Los Angeles County Museum of Art, and several important U.S. private collections. It included some of the earliest known objects collected from the Fijian islands, together with antique drawings and paintings, extraordinary 19th century photographs, and examples of revived and continuing traditional crafts.

The Los Angeles venue for the show is particularly appropriate, as according to the 2010 U.S. Census, 75% of Fijian-American live in California. Not only is the Los Angeles County Museum of Art becoming an import repository for Pacific Island materials, this is the first time that many Fijian American families will be able to see the highly skilled carvings and decorative and ceremonial textiles that are their heritage given pride of place in an American museum. There are at least 1.4 million Americans of Pacific Islander ancestry in the U.S., including Native Hawaiians, Samoans, Chamorros, Fijians, Marshallese and Tongans.

This major LACMA exhibit of the earliest collected art of Fiji would not have been possible without loans from Cambridge University’s Museum of Archaeology and Anthropology (MAA). Fiji became a British colony in 1874, and Baron Anatole von Hügel, who became the Cambridge museum’s founding curator, worked together with other members of the household of Governor Sir Arthur Gordon to collect examples of all the Fijian arts. These artifacts were among the first to form the core collection at the MAA. 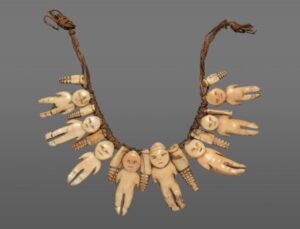 Many of the objects in the LACMA exhibition were greatly valued as symbols of power and authority in pre-colonial Fiji. A number of important objects were presented to Sir Arthur Hamilton-Gordon, the British governor who arrived on the islands in June 1875, and some to Lady Gordon, his wife. (Gifts made to Lady Gordon during her stay included an over-100 foot long, double hulled canoe, which she returned to the presenting chief with the request that he take care of it for her.) The gifting of these objects was part of ceremonial recognition by the Fijian chiefs of their subordination to the British Empire, in the person of the Governor, and marked the transfer of authority to him.

The Austrian traveler and botanist Baron Anatole von Hügel (1854-1928) spent more than two years in Fiji beginning in 1875, collecting specimens and artifacts and documenting them in detail. He lived an itinerant life, moving from community to community in the interior as well as along the coasts, and was ill and half-starved from the challenges of living in the difficult terrain, finally reduced to cutting the buttons from his clothes to trade for the last artifacts he collected  in the interior of the island of Vita Levu. He was found there by Arthur Gordon, who brought him back to Government House to recover. While resting, von Hügel was able to begin the task of completing his notes and cataloging his materials, a phenomenal undertaking that ended only on his death, still working in Cambridge as the first curator of the MAA collections.

The background information at the exhibition explained how scraped, oiled and polished sperm whale teeth, tabua, are the most important items in Fijian culture. Tabua were presented to cement familial relationships and to show honor and allegiance; they would also be given to another when requesting assistance in a dire situation. The extraordinarily elegant throwing clubs, spears and other weapons of war, sometimes delicately inlaid with bits of whale ivory or shell included in the exhibition, were also potent symbols of power. 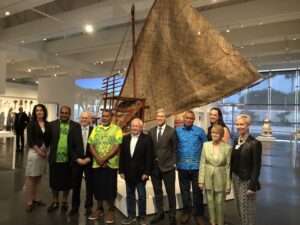 Ancestor images, priests’ dishes, and flesh forks were housed in temples or spirit houses. Spirit houses with lofty roofs traditionally held these consecrated objects and ancestor figures, which were probably bound to a pole inside them. Binding and coiling were well-practiced arts in Fiji. Coiling imbued objects with greater power and was used to decorate architectural space and sanctify it. The exhibit has a small, beautiful double temple originally given to the Peabody Essex Museum in Salem Massachusetts in 1835. Such miniature spirit houses were made of a foundation of reeds wrapped in complex bindings of plied coir cords.

The exhibition has a number of objects that are both rare and outstandingly powerful, such as a unique necklace of human-shaped figures and pendants of whale ivory on a coir cord that was probably given to Lady Gordon between 1875 and 1880.

Early collections of Fijian and other South Pacific objects by sailors, whalers and other travelers have made their way through many hands over the years to private collections in the U.S. and the U.K. A number of these private holdings complement the early-established museum collections. The juxtaposition of colonial period museum-collecting and privately-owned objects in the exhibition is a reminder of the manifold ways in which art has been preserved and has traveled between cultures. Some objects in the show came to Fiji through centuries-old sea trade between Fiji and Tongan islanders. Other items were exchanged between Fijians and British and American sailors who purchased them along with foodstuffs or in exchange for iron tools, trinkets and other trade goods in the 1800s and 1900s.

The exhibition provided a new opportunity to build on the existing cooperation between U.S. collectors and visiting Fijian officials to exchange ideas on future collaborations with the Fiji Museum in Suva. 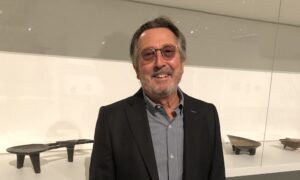 Collector William Hughes with an oil bowl lent from his collection to the exhibition.

A spectacular, 288 page catalog by Steven Hooper, Fiji: Art & Life in the Pacific, will be an essential addition to any library on Pacific Island materials. The many photographic images of Fiji in the 19th and early 20th century enable the viewer to imagine the objects in their original context and even with the actual chieftain who was the former owner of the objects.

Several important exhibitions and research projects in the last decade have focused on Fijian art and culture. The Fijian Art Research Project, a three-year collaboration by the Sainsbury Research Unit (SRU) at the University of East Anglia and the Museum of Archaeology and Anthropology (MAA) at the University of Cambridge was sponsored by the UK Arts and Humanities Research Council (AHRC) beginning in 2011. Nine other museum-partners from Fiji, the U.K., U.S. and Scotland joined to create a model for collaborative research and public access to information on cultural materials that held great meaning for British-Fijians and others, but which had rarely been exhibited to the public. 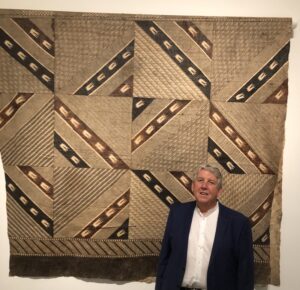 Collector Mark Blackburn with a barkcloth, or masi from the Mark and Carolyn Blackburn Collection, Honolulu, Hawaiʻi.

Another major publication and exhibition of Fijian art (together with many community outreach activities) marked the centenary of the MAA’s present museum space in Cambridge in 2013. Chiefs and Governors, by Anita Herle and Lucie Carreau, University of Cambridge Museum of Archaeology & Anthropology, 2013, with contributions by Steven Hooper and others, presented the key early collections at Cambridge and other major museum holdings. Much more than just a catalog of the arts, the publication was a summary of the work of many scholars who contributed to the Fijian Art Research Project. An essential feature of the project (and the publication) was to define new models for institutional research involving collaborative work with living communities as well as institutions in Fiji, outreach to Fijian communities in the U.K. and elsewhere, and to provide inspiration to contemporary artists and Pacific Islander designers.