Ten organizations have signed a joint letter to the U.S. State Department’s Bureau of Educational Affairs and the Cultural Property Advisory Committee (CPAC) at the Department of State, urging them to address longstanding problems of fairness and serious process issues at CPAC.  The letter was authored by Arthur Houghton, President of Global Heritage Alliance (and a former CPAC member). It was signed by policy-watchers including the American Hellenic Institute, the Committee for Cultural Policy, Jews Indigenous to the Middle East and North Africa (JIMENA), and key art collecting and trade organizations.

The letter says that CPAC has long ignored concerns among representatives of religious minority organizations. It has approved Memorandums of Understanding (MoU) with Middle Eastern countries that claim exclusive rights over all cultural heritage, including the religious and community property of oppressed minorities. The letter also criticizes the lack of transparency in State Department actions and the failure of requesting counties to provide factual documentation showing the need for U.S. import restrictions.

The letter was spurred by the January 2020 request for an MoU blockading import of virtually all ancient and ethnographic art and artifacts by the Turkish government. That request is now under consideration at the State Department. Imposing such a blockade could require the return of heritage of Orthodox Christian, Jewish, and other minority groups to Turkey if brought into the U.S.

The letter also cited the announcement by Turkey’s government that two major monuments of Orthodox Christian heritage will open as mosques for public worship.  The Kariye Camii and Hagia Sophia are among the most important religious edifices of Byzantine Constantinople. Hagia Sophia is a World Heritage Monument and the world’s most famous example of Byzantine architecture – as well as being one of the most popular tourist destinations in Turkey.

The Kariye Camii is the main church of the Chora monastery and contains the most important examples in the world of the final flowering of Byzantine painting and mosaic decoration, imagery which is held to be improper for a place of Muslim worship; its decorated interior walls and dome would have to be covered if the building was used as a mosque. Both buildings have been public museums for decades, open to all under Turkey’s secular constitution. 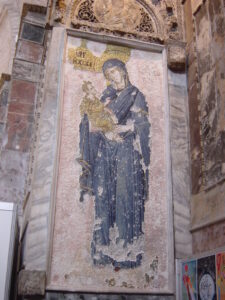 President Nick Larigakis of the American Hellenic Institute stated in an August 25, 2020 press release that, “It is unconscionable for the U.S. State Department to even consider a proposed MoU on cultural property from the Turkish government, especially in the light of its conversion of Hagia Sophia and the Chora Church in Istanbul… The Ecumenical Patriarchate and Orthodox Christians are under assault by President Erdogan’s regime. The last thing the State Department should do is reward and provide an endorsement for such behavior and that is what the proposed MoU would do.”  He added, “This is why it is important for the State Department’s Cultural Property Advisory Committee to get this process right and without administrative vulnerabilities that would be to Turkey’s advantage and this coalition letter addresses our concern.”[1]

Under the aggressive leadership of Turkish President Recep Erdoğan, nationalist, anti-minority policies have expanded in Turkey and religious institutions there have suffered. In January 2020, the American Hellenic Institute strongly opposed signing a cultural heritage agreement with Turkey because “Turkish cultural policies reinforce and support long-standing policies that deny and work to erase the reality of Greek, Armenian and other cultures that preceded the arrival of the Turks to Asia Minor, Thrace, and Constantinople by thousands of years.”

The letter’s signatory organizations say that they fully agree with the fundamental law that established the Cultural Property Advisory Committee, the 1983 Cultural Property Implementation Act (CPIA).  All strongly support the proper use of the CPIA, together with the enforcement of all federal laws. However, they say that the CPAC Committee has failed to honor the legal requirements that must be met in order for an MoU to be granted. 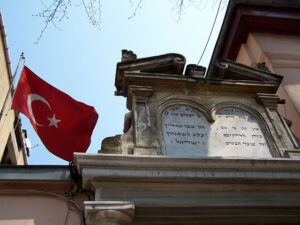 The letter notes that contrary to the requirements set by Congress, the requests by Middle Eastern countries ignore those countries’ dictatorial abuses of the human and religious rights of minorities and as well as failing to meet Congressionally mandated criteria for self-help and protection of cultural property within their borders. The letter also points out that the membership of the Cultural Property Advisory Committee is heavily weighted toward archaeologist members who are hostile to businesses and collectors, and to the holding of archaeological materials within U.S. museums. The letter makes plain the potential for conflicts of interest – it notes that source country governments have maintained MoUS for up to 30 years – while CPAC has lacked the art trade representation required by law.

This is not the first time that objections have been raised by religious and minority organizations to MoUs issued by the Department of State. In December 9, 2018, eighteen Jewish organizations issued a letter addressing Secretary of State Michael Pompeo regarding MoUs and agreements signed with Middle Eastern and North African countries[2]. In that letter, the Jewish organizations stated.

“We ask that the State Department’s Bureau of Education and Cultural Heritage adheres to the limitations set by Congress under the Cultural Property Implementation Act by denying broad, excessive import restrictions to nations that have neither valued nor cherished the ancient heritage of Jewish, Christian, and other minority peoples. We further request that all future MOUs from the region include provisions that list and name specific Jewish and Christian items to be excluded from the restricted list of items. Such items include Torah scrolls, Torah cases, Jewish prayer books, Jewish manuscripts, religious ceremonial articles, and all Jewish ritual and prayer materials that include Hebrew inscriptions or references to original Jewish owners – whether they be individuals or Jewish institutions.”

Nonetheless, MoUs have continued to be issued that by default, include Jewish and Christian manuscripts and other articles of religious heritage.