Climate Activists Glue Themselves to Masterpieces

The chosen artworks speak to human struggle against apathy and political obstruction. 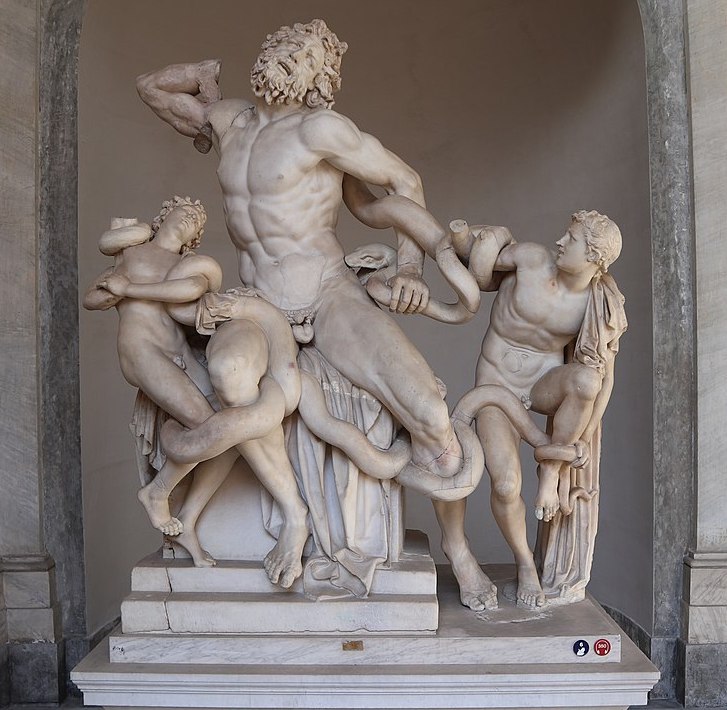 This summer has been overshadowed by the impacts of human-caused climate change worldwide. The news has been relentless – unprecedented heat waves in England, drought in the American Southwest, fires in France, and massive flooding in Pakistan and Afghanistan. Yet there have been indicators of hope on the political front. The US Congress finally succeeded in passing its first major climate-change mitigating legislation, the State of Massachusetts announced an ambitious state-wide plan to cut emissions, and California proclaimed an upcoming ban on new gas-powered car sales.

This has also been a summer of climate-change activism, as people across the world rallied to demand immediate and dramatic action to reduce emissions. Some of the highest profile protests have involved a small number of activists who have made art museums the sites of their calls for climate action, drawing significant attention from news media to their cause.[1] 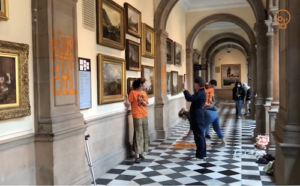 Supporters of Just Stop Oil disrupt the Kelvingrove Art Gallery and Museum‎ by gluing onto the 19th century painting, ‘My Heart is in the Highlands’ by Horatio McCulloch, to bring attention to the climate emergency. Screenshot, Just Stop Oil.

The latest museum-based protest actions have all taken the same form. Several protestors have entered the museums during their open hours, and glued their hands to the frame, base, or pedestal of a major work of art, thus ensuring that museum staff cannot quickly remove them from the building. The artwork then becomes a podium from which the protestors can make their plea heard.

The first of these protest actions took place on June 29, 2022. Members of the UK-based climate activist group Just Stop Oil glued their hands to the frame of a painting at the Kelvingrove Museum in Glasgow, Horatio McCulloch’s My Heart’s in the Highlands (1860). Eight more similar protests were staged between June 29th and August 21st by members of Just Stop Oil and the Italian group Ultima Generazione. Between August 22nd and August 26th, members of a German group glued themselves to five different artworks.[2] All three groups made the same demand of their governments: no new oil and gas projects. Continuing to approve new programs for pipelines, refineries, and extraction projects will expand the use of fossil fuels when the environmental damage they cause has become ever more obvious. Unlike earlier museum-based protests, these protesters are not demanding that museums end fossil-fuel company sponsorships, as previous museum protests have done. Instead their demands are focused on their nation’s response to climate change. 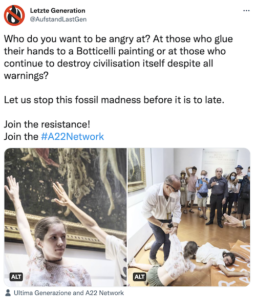 By affixing themselves to the supports or frames of their chosen artworks, the protestors have avoided doing any damage to the works themselves – they say they have no intention to threaten harm to any of them. The artworks they chose as their allies in their protest were not selected at random, or merely with an eye to their fame. Instead, each work relates in some way to their cause. The artworks speak to the profound and complex relationship of humanity with the natural world, and to historic struggles for justice and right action in the face of inequality, ignorance, self-interest and apathy – the very same obstacles facing those engaged in the fight against human-caused climate change.

Prior protests have also used museums as the stage for performance art. Some of the most famous actions were by a group known as Libérons le Louvre against partnerships between the Louvre and the France-based global corporation Total. In its 2018 protests, Libérons le Louvre charged Total with wrongdoing ranging from bribery of government officials in Iran, Iraq, Italy, and Malta, to complicity in the use of slave labor in Myanmar, and infringement on the land rights of Western Saharans in Morocco.

The media coverage of such actions has rarely focused on the connection between the subjects of the famous artworks that served as backdrop and the causes embraced by the protesters. Nonetheless, when they were created, the artworks’ message was often highly political and controversial, reflecting the crises of the times. 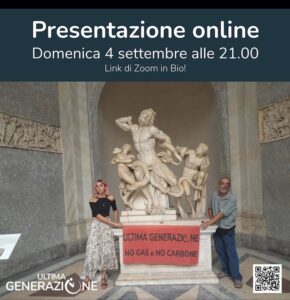 In the climate activists’ recent protests, the first targeted artwork, My Heart’s in the Highlands, was chosen by Just Stop Oil for their protest because of its resonance with their activism. In the mid-19th century, when McCulloch painted this picturesque view of the Highlands, the small farmers who had traditionally lived in the Scottish Highlands were being forced out by wealthy landowners. Under these pressures, the farmers came together to protest their treatment and securing some rights under the Crofter’s Act 1886.

The current protests argue that a similar dynamic is at play in the battle for a much larger territory: the entire planet. As individuals, activists have little power to compel the owners or stakeholders in oil and gas companies, or to initiate government actions, but together, and with museum halls as their soapbox, they can make their demands heard.

Italian environmental activists who glued their hands to the pedestal of the Laocöon in the Vatican on August 18, 2022, evoked solidarity with the theme of the artwork. The Greek sculpture, which dates to first-century BC, depicts Laocöon, a Trojan priest, and his two sons, trapped in the coils of snakes that will soon strangle them to death. Laocöon sought to dissuade the Trojans from admitting the Trojan Horse into the city, and Athena, a partisan of the Greeks, sent the serpents to silence them. Because Laocöon’s warning went unheard, the Greeks were able to enter Troy and sack and burn the city.

Environmentalists find Troy’s plight is not dissimilar to that of our planet today. For decades, scientists have been warning governments of the perils of unchecked emissions, but (as recent investigations have uncovered) oil and gas companies have frustrated their calls for change by denying the climate impact of fossil fuels, hiding information, and funding politicians who refuse to act to curb emissions.[3] The serpentine power of fossil-fuel companies retains its stranglehold on our political institutions today. 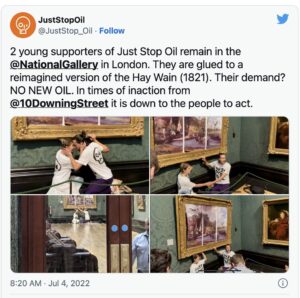 The possibility that real action on climate change may require radical mass protests is indirectly invoked by another artwork selected as a protest site by Just Stop Oil: John Constable’s oil painting The Hay Wain (1821, National Gallery, London). Protestors at the National Gallery covered Constable’s peaceful scene of rural country life with an apocalyptic alternative version, in which the blue sky and white clouds are replaced with smog and airplanes, the river with a paved road, and the forest with polluting factories. According to the National Gallery, the pasted-on protest art was removed with minimal damage to the frame and to the varnish.

The reality of early 19th century rural Britain, when Constable was painting The Hay Wain, was not so peaceful as his picture suggests. An economic depression and dropping food prices in the wake of the Napoleonic Wars created a crisis for British farmers, even as large landowners expanded their holdings and the wealth gap grew. Riots protesting government inaction in the face of the rural troubles led to property destruction and social unrest.

Again, the climate activists were making a pointed comparison. In the UK today, oil and gas companies are raking in windfall earnings and distributing hundreds of millions of pounds to shareholders, while ordinary citizens are struggling to pay skyrocketing energy costs. With winter around the corner, middle and lower-class families are facing the possibility that they will not be able to pay to heat their homes. In response, city art museums are drawing up plans to serve as ‘warming shelters’ for the public but worry that the relief they can offer will be limited by their own growing energy bills. Even though a majority of Tory voters support nationalizing energy and water companies in response to the crisis, neither of the front-running candidates to replace Boris Johnson as Prime Minister are considering the idea.[4] Neither Truss nor Sunak have announced a plan to offer meaningful financial aid to households struggling with energy costs. Though popular dissatisfaction has yet to break out in riots like those that rocked rural areas from 1810-1830, more than 130,000 UK citizens have signed a pledge not to pay exorbitant energy bills in coming months.

Other artworks chosen by protestors to help them speak out include two Italian national treasures: Botticelli’s Primavera (1477, Uffizi Gallery, Florence), and the Scrovegni Chapel (14th century, Veneto), site of Giotto’s frescoes of the Last Judgement. Botticelli’s work was chosen as an idyllic vision of the natural world, at peace and in harmony with humanity. Giotto’s frescoes are a vision of the choice before humankind; to do the right thing or face a very unpleasant, if not truly apocalyptic, future.

A New Direction for Protests

Museums have been the site of major anti-oil and gas protests for many years, but historically, those protests have focused on the behavior of the museums themselves.

Two of the world’s great museums, the Louvre and the British Museum, have long been the site of protests demanding that they end sponsorship by oil and gas companies. According to protestors, by accepting financial support from companies such as Shell and BP, museums are complicit in the whitewashing of the damage those companies do and have done to the global environment, and especially to vulnerable communities in developing countries. Museums have also facilitated meetings between representatives of oil companies and members of foreign governments in countries where they sought to pursue extraction projects.[5] 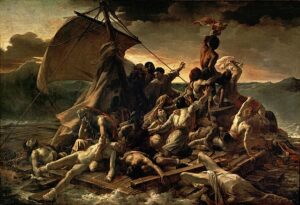 The choice of the Laocöon as the site of a climate protest this summer recalls a 2020 action by the group BP Or Not BP, who have campaigned since 2012 for the British Museum to end its sponsorship deal with the fossil-fuel company. A BP-sponsored exhibition on the Trojan War at the British Museum inspired protestors, dressed as Greek warriors, to drag a wooden horse (paid for by crowdfunding) into the forecourt of the museum, as a statement of popular distaste for the museum’s oil ties. “The Trojan horse is the perfect metaphor for BP sponsorship,” a member of the group explained. “On its surface the sponsorship looks like a generous gift, but inside lurks death and destruction.”[6]

Other notable protests include a 2018 ‘die in’ staged by the group Libérons le Louvre in front of Gericault’s The Raft of the Medusa (1818) – a painting that itself is a testimony to the human cost of corruption and inequality. The shipwreck led to hundreds of deaths and incredible suffering for those few who survived to be rescued. The disaster was caused by the incompetence of the captain, who had been given charge of the ship because of his aristocratic rank, despite his lack of experience. In the wake of the disaster, the captain responsible was sentenced to only three years in prison. 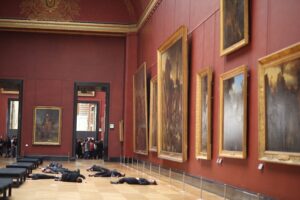 Protestors argue that by accepting funding from fossil fuel companies, museums are helping the companies to evade the consequences of reckless profiteering. Like the captain of the Medusa, fossil fuel companies are endangering the lives of others, and seem likely to not only escape punishment, but with billions in profits.

Protest groups have scored several notable successes in the past, prompting organizations such as the Royal Shakespeare Company to cut ties with BP. However, because art museums subsist on donations and public funding always falls far short of their actual needs, fossil-fuel sponsorship will likely only end when the industry itself ceases to be profitable. In recent years, museum protestors have shifted their focus from museum’s relationships with oil companies to demanding more practical actions by government against fossil fuels. By locating protests in the context of individual works of art, both forms of protest underscore the importance of great art collections to modern debates. These masterpieces helped protesters draw attention to their cause, but they also have their own truths to tell.