Thai Buddhist Tales at the Chester Beatty Library in Dublin 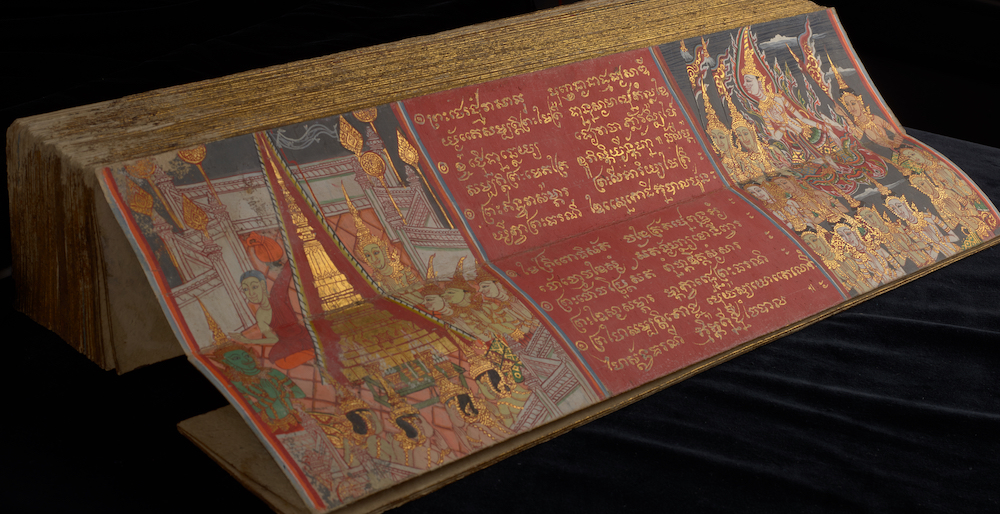 The exhibition Thai Buddhist Tales: Stories along the Path to Enlightenment at the Chester Beatty Library offers visitors a rare opportunity to study some extraordinary examples of Thai Buddhist manuscripts. This exhibition is also suggestive of the exciting future ahead for digital curation. 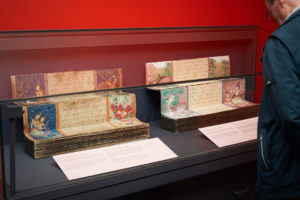 The physical materials on display represent just a tithe of this Dublin museum’s remarkable holdings. Sir Alfred Chester Beatty (1875-1968) was an American ex-patriate who rose from work as a “mucker” at a mine in the Rocky Mountains to become a wealthy businessman, knighted for services to the United Kingdom during the Second World War, and an honorary citizen of Ireland. He was also an avid collector of books, manuscripts, and all manner of works on paper.

In 1950 he moved to Dublin and built a research library and gallery to house his collections. Today, the Chester Beatty is a free public museum, part of whose mission statement is “to promote a wider appreciation and understanding of the international cultural heritage embodied in the collections and to foster relations between Ireland and the peoples whose cultures are represented in the collections.” The Chester Beatty collection contains some of the world’s most beautiful and historic texts in many traditions, including Islamic, Buddhist, and Christian religious texts, and extraordinary secular materials from cultures across the world and throughout history. 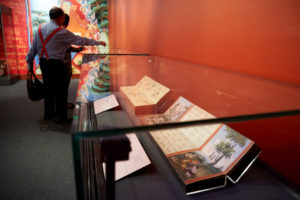 In keeping with their focus on outreach and cross-cultural impact, the Chester Beatty Library has created a 3D virtual reality (VR) gallery for their special exhibition Thai Buddhist Tales. If you cannot travel to Dublin, this exhibit can come to you. ‘Visitors’ can explore the exhibit through VR goggles or on their own computer screens. The viewer can walk in virtual space around the gallery, read the museum labels, and peer in to look closely at the colorful manuscripts on display. The 3D virtual reality brings the viewer into the entire gallery space – everything from the corners of the ceiling to the doorknobs of the bright red doors of the exhibit gallery is included in the view. In addition, online visitors can view a digitized copy of the entirety of each manuscript and study every page in detail; something the museum visitor cannot do at the exhibit itself. 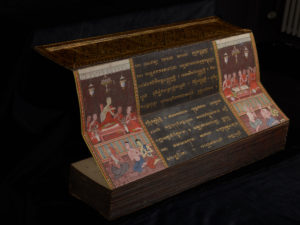 Thai books were originally made of long rectangular pages cut from palm leaves, bound together on the edges, and folded, accordion-style, along the bindings. Traditional paper manuscripts (samut khoi), which make up the majority of the books on display, emulate the dimensions and construction of palm-leaf books. The front and back covers on some texts are intricately decorated, often with gold designs. The nineteen manuscripts in the exhibit are composed of pages of Khom script, often framed by colorful illustrations depicting popular narratives in Thai Buddhism.

The Theravada school of Buddhism came to what we now think of as Thailand in the 12th century from Sri Lanka, replacing previous forms of Buddhism practiced in the region. Today, over 94% of the Thai population is Theravada Buddhist. The main textual tradition of Theravada Buddhism is the Pali Canon, extracts from which feature in many of the books in the Chester Beatty Collection.

Unlike many illustrated books, in which the pictures complement or expand upon the written content, the texts and the images in these manuscripts are sometimes wholly independent narratives. In the examples on display, extracts from the Pali Canon are often paired with depictions of scenes from the previous lives of the Buddha. Written accounts of stories from the life of the Buddha are rare in Thai manuscripts. 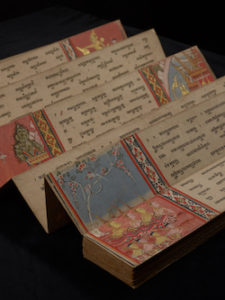 Scenes from the birth tale of Vessantara, 18th century , Thailand , CBL Thi 1341, © The Trustees of the Chester Beatty Library, Dublin.

Some of the most recurrent illustrations in the manuscripts feature the stories of Phra Malai, a Theravada monk who accumulated great merit and obtained supernatural powers. Many of the pictures show his travels to the hells to witness the plight of the people condemned to suffer there. They implored him to ask their relatives on earth to make merit on their behalf in order to ease their plight, which he did on his return. Other stories narrate his work as a teacher and guide to the living. These stories were at one time a popular element in community gatherings, particularly funerals. Monks would recite the legend, often with colorful or even comical additions, until the practice was banned at the end of the 18th century by King Rama I, when their role was assumed by professional performers instead. These manuscripts, some of which show illustrations of monks or chanters reciting the stories, are records of past cultural practices, as well as historic art works.

Though Buddhism in Thailand may go back as far as 250 BCE, the oldest surviving Thai books are only from the seventeenth century. The tropical climate, insects, and war, especially the sacking of the capital city of Ayutthaya by Burmese forces in 1767, have all taken their toll. The growing awareness world-wide of the need to collect and preserve historic artifacts will, with luck, ensure that those texts that survive to the present day will endure long into the future. Digitization projects like that undertaken by the Chester Beatty are a part of this ongoing work of conservation, by making it possible for the texts to be studied without being handled or exposed to light. Digitized collections and exhibitions are also a powerful means of expanding access to art, opening museum doors to anyone with an internet connection.

To learn more about this interesting textual tradition visit the Thai Buddhist Tales: Stories along the Path to Enlightenment exhibit at the Chester Beatty Library in Dublin until January 26, 2020, or visit the 3D virtual reality (VR) gallery of the exhibit from the comfort of your own home.