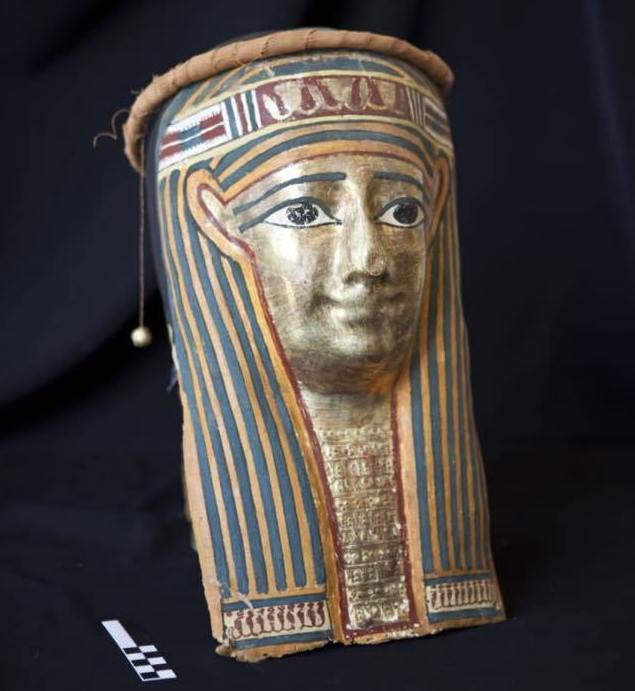 Ladislav Otakar Skakal, a former Italian former honorary consul in Luxor, was sentenced in absentia to a fifteen-year jail sentence in Egypt on January 2020 for smuggling antiquities. He is said to be now living in Rome. On December 17, 2020, Egypt demanded the ex-consul’s extradition from Italy together with that of former Trade Commissioner to Egypt Massimiliano Sponzilli. However, there is no extradition treaty between Italy and Egypt.

The smuggled antiquities had been shipped from Alexandria, Egypt to the port city of Salerno in Italy. According to Egyptian authorities, Skakal’s diplomatic status enabled him to ship the items out of Egypt without a customs inspection, although Skakal’s diplomatic status actually was withdrawn in 2015 after he left his post. Skakal was said to have been working with Egyptian accomplices who supplied the antiquities to him. In 2017, Italian police opened the container and found what Egyptian officials described as 21,660 coins of all periods, 151 Shabti statues, eleven pottery utensils, five mummy masks and  a wooden sarcophagus inside boxes supposed to hold the household goods of the consul. 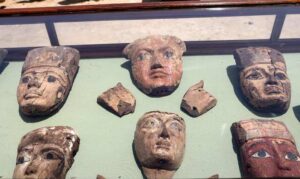 Egyptian officials opened a year-long investigation after being informed by Italian authorities of the discovery. In the course of the investigation, Egyptian authorities arrested the owner of the shipping company, Medhat Michel Girgis Salib. Also arrested was Raouf Boutros Ghali, the nephew of former U.N. Secretary-General, the late Boutros Boutros-Ghali, and brother of Youssef Botros Ghali, Egypt’s former Minister of Finance from 2004-2011 under President Hosni Mubarak. Raouf Boutros Ghali was convicted in a Cairo court in February 2020 for his involvement in the operation, sentenced to thirty years in prison and fined 6 million Egyptian pounds (~$382,000).

How illegal exports are checked

An independent investigation by journalists Mussa Youssef and Muhammad Ibrahim at digital media outlet Daraj found additional information on the export of the smuggled goods. Three departments are responsible for checking to ensure that antiquities are not illegally shipped from Egypt: the Egyptian Postal Authority, customs, and a special committee of inspectors who check parcels for stolen antiquities. The journalists were told by a postal inspector who wished to remain anonymous that, “No parcel comes out of Egypt unless it is manually inspected and examined by inspectors at outlets.”  The inspector described weekly meetings to identify shipments suspected of containing antiquities prior to their shipment by air or from one of three seaports.

Series of errors, then seizure 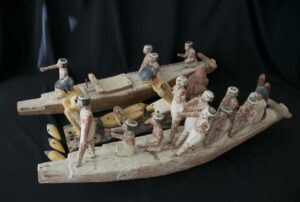 To fill out the antiquities shipment of 20 cardboard boxes, 110 additional boxes of furniture and household goods were added belonging to former diplomats at the Italian Embassy in Egypt, along with parcels addressed to a woman in London bearing the name of a high Egyptian official’s family, were added to the container by the shipper.

Documents from the Alexandria port that shipped the container containing Skakal’s boxes of antiquities stated that the boxes belonged to a diplomat and there was no right to search them, despite Skakal having lost his diplomatic status several years before.

The ship carrying the container left Alexandria on May 5, 2017 and arrived in Salerno on May 9. However, due to an error in the documents regarding the name of the owner, it was delayed for more than a month on the dock. After no one claimed the shipment, the Italian police obtained permission from Deputy Attorney General Katia Cardello to inspect it. Discovering the antiquities, they opened an investigation, and almost a year later, in March 2018, informed Egyptian authorities.

Illegal excavations said to be source 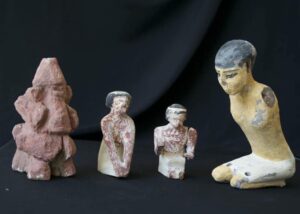 Mostafa Waziri, Secretary General of the Supreme Council of Antiquities, informed the journalists that the seized artifacts came from the El-Minya Governate in Central Egypt. According to a letter sent by the Police of Tourism & Antiquities to the Public Prosecution Office in Cairo, the antiquities were said to have been gathered in illicit excavations in Upper Egypt. This region has become notorious for opportunistic looting in recent years, with 930 individuals arrested in 2019. The journalists were unable to obtain information on the numbers of smugglers that have been arrested in the same periods. The Italian shipment accounts for all the coins said to have been intercepted, but the Kuwaiti Customs Directorate General announced the seizure of five Pharaonic antiquities the same year.

Seized objects were numerous but of low value 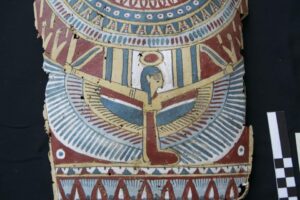 The artifacts were returned to Egypt in 2018 and exhibited in the Egyptian museum in Cairo after restoration by Egyptian conservators. The seized items would not have made much of an impact in the current market for Egyptian antiquities, which includes hundreds of thousands of items exported prior to 1983, when lawful trade and export from Egypt was ended. While some of the smuggled items are attractive, they required significant conservation and repainting to bring them to exhibition quality. The approximately 22,000 bagged copper and some silver coins were by far the majority of items, followed by the mold-made faience Shabtis. One mummy mask was of good quality but the others showed considerable damage. A ceramic ‘boat of the dead’ had 40 oarsmen and the wooden coffin was carved in areas but not painted.

Additional Egyptian artifacts were found in the honorary consul’s former home in the Zamalek neighborhood of Cairo. Skakal’s maid testified that a sliding door at his apartment led to a storeroom filled with “swords, daggers, old paintings, antique plates, vases with pharaonic patterns, coins, old cooking tools, and statues.”

At Egypt’s request, Skakal was placed on INTERPOL’s Red list in 2019. A Red list notice asks law enforcement in Interpol member countries to detain and hold the listed individual for possible extradition, but participating countries are not required to do so.

Egypt also is said to have requested that the matter be referred to the International Criminal Court. (In the past, Egypt has not made a formal declaration accepting the jurisdiction of the ICC.)

Some observers have connected Egypt’s December 17, 2020 demand for the Italians’ extradition to Italian prosecutors’ announcement just one week before, on December 10, that they will charge four top Egyptian National Security Agency officials with the 2016 kidnapping, torture and murder of Italian Cambridge University PhD student Giulio Regeni. Italy recalled its ambassador to Egypt in April 2016, citing lack of co-operation from the Egyptian authorities in the Regeni investigation, but reinstated him in August of 2017. 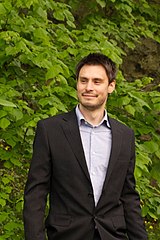 Twenty-eight year-old Regeni was studying Egypt’s independent trade union movement, particularly the street vendor unions, when he disappeared on January 25, 2016, the fifth anniversary of the Egyptian uprising. There have been a number of reports that Egyptian police and very high authorities, including Mahmoud el-Sisi, son of President Abdel Fattah El-Sisi, and deputy head of the Egyptian General Intelligence Directorate, had to have been aware of his detention and torture.

Regeni’s body was found on February 3 in a ditch outside Cairo. It showed signs of extreme torture from beatings, including brain hemorrhage, two dozen bone fractures including all fingers, toes, legs, arms and shoulder blades, stab wounds, burns, slashings with razor blades, and punctures with an awl. A false trail was created by Egyptian police who alleged he had been killed by gang members, all of whom were then shot by police. Egyptian authorities have also alleged that Regeni was kidnapped and tortured by Muslim Brotherhood members in order to harm the reputation of the El-Sisi government

The Egyptian officials named by Italian prosecutors are:

The Egyptian government has claimed the officers were not responsible and insisted that the perpetrators of Regeni’s murder are unknown. Egypt, under President Abdel Fattah El-Sisi, has been widely criticized for its human rights abuses and forced disappearances of activists and political prisoners. Many of its prisons and police station wards are notorious for daily beatings endured by prisoners kept in flooded, freezing, and overcrowded cells where there is not even room for all to lie prone. Some prisoners are kept close to starvation and medical care is non-existent. Families, lawyers, and human rights organizations cannot contact them. In contrast, ‘luxury prisons’ for the favored elite are run like spa hotels.

In December 2020 Italian journalist Corrado Augias protested French president Emmanuel Macron’s decision to award El-Sisi the Légion d’Honneur because of the El-Sisi regime’s record of human rights abuses and Egypt’s failure to cooperate in the investigation of Regeni’s torture and murder. Augias ceremoniously returned his own Légion d’Honneur to the French Embassy in Rome. Other recipients have followed suit.