Home > Global Art > Berlin’s Museuminsel in the Wake of Vandalism

Berlin’s Museuminsel in the Wake of Vandalism 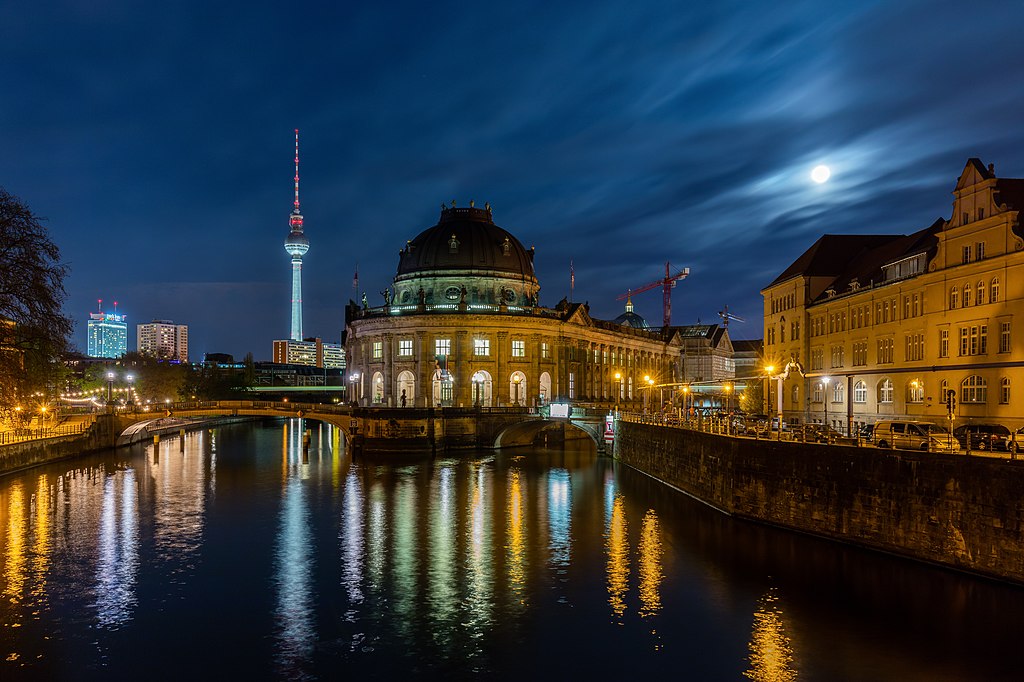 Bode Museum in moonlight, Museuminsel, Diego Delso, 22 April 2016, 22:26:41 Moon light view of the Bode Museum, located in the Museum Island of Berlin, Germany. The museum, originally called the Kaiser-Friedrich-Museum (after Emperor Frederick III) and later honored to its curator, Wilhelm von Bode, was designed by architect Ernst von Ihne and completed in 1904. The museum hosts a collection of sculptures, Byzantine art, coins and medals.

Weeks after the event, there are few leads and no certain motives for a baffling case of vandalism at Berlin’s Museuminsel (Museum Island). On October 3rd, museums re-opened from the pandemic-imposed months-long closure, only to have vandals spray an “oily liquid” on seventy stone sculptures, paintings, and ethnographic items, including Egyptian sarcophagi. The objects appeared to have been targeted at random, and no one has stepped forward to claim responsibility. 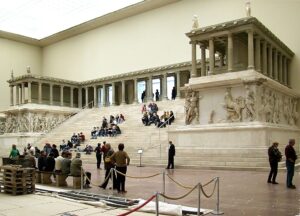 Authorities chose not to report the incident to the media until a few weeks later in order to pursue their investigation. October 3rd was German Unity Day, a national holiday commemorating the reunification of East and West Germany, with this year marking the thirtieth anniversary of reunification. However, investigators have not found any indication that the acts of vandalism were linked to the holiday.

During a security conference of the German Museum Association at the end of September 2020, just a few weeks before the attack, Germany’s minister of state for culture, Monika Grütters, had expressed concern about insufficient museum security, demanding that protective measures in the nation’s museums be “thoroughly investigated and questioned.” Thefts or damages to artworks are not just financially damaging to institutions, but imperil the cultural patrimony of the German people – even when the artworks are not examples of Germany’s own cultural heritage, many objects have a long history within their host country, and its role as safe-guardians of these objects is a part of Germany’s national identity. 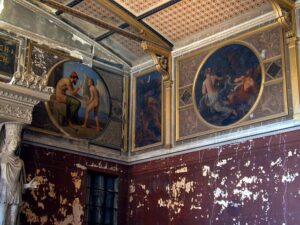 The Museumsinsel was made a UNESCO World Heritage site in 1999, recognizing its Outstanding Universal Value. UNESCO’s official statement on the Museuminsel’s World Heritage status identifies both the collections within the museums, and the institutions themselves as important historical monuments. The oldest of the five museums that make up the group was established in 1824 – the most recent in 1930. As a set, the museums showcase “the evolution of approaches to museum design over the course of the 20th century.”

The Altes Museum is the oldest of the five museums. Completed in 1830, the “Altes Museum” is considered an important work of German Neoclassical architecture, a design well-suited to its collection of Greek, Etruscan, and Roman art and artifacts. (A 360° tour of the Altes Museum led by German classical archeologist Dr. Martin Maischberger is available on the museum website.)

The Neues Museum (built 1843 to 1855) and the Alte Nationalgalerie (1862-1876) were constructed in a combination of Neoclassical and Renaissance Revival styles. At present, the Neues Museum contains Egyptian artifacts – its star object is a world-famous bust of Nefertiti – as well as archeological finds from the Stone Age to the late Classical period. (The 360° self-guided tour of the Neues Museum begins with the bust of Nefertiti.) The Alte Nationalgalerie houses 19th century paintings and sculptures which can be seen through a 360° self-guided tour here.

Both the Alte Nationalgalerie and the Neues Museum suffered damage during World War II, but while the former was quickly repaired and reopened to visitors by 1949, the Neues Museum did not fully reopen until 2009, after a ten-year restoration project.

The fourth museum of the complex, the Bode-Museum, was built in Baroque Revival style between 1898 and 1904. When it first opened, the museum’s displays combined paintings and sculpture in side-by-side arrangements – then a radical choice. The Bode-Museum now houses Byzantine art, as well as a world-class sculpture collection ranging from the Medieval to the Early Modern period, and can be seen through a 360° self-guided tour.

The most visited museum of Museumsinsel is the Pergamonmuseum, a spartan Neoclassical building constructed in 1930. It contains a portion of the Greek and Roman art of the Antikensammlung, including the work that gives the museum its name, the famous Pergamon Altar. The museum also houses a collection of artifacts from Mesopotamia, Syria, and Anatolia acquired during German excavations in Babylon, Assur, Uruk, and Sam’al as well as a major collection of Islamic art. The museum’s 360° self-guided tour can be viewed here.

Of the five museums in the Museumsinsel complex, only the Bode-Museum was spared any oil attacks by the vandals.

A Puzzling Crime with a Possible Tie to QAnon 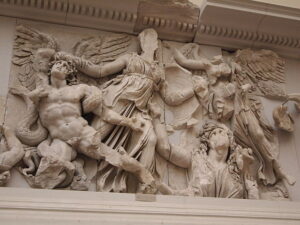 Initially, investigators found no apparent motive, no leads, and no link between the objects affected. Nonetheless, there was plenty of speculation about the vandalism. Loveday Morris and Luisa Beck, writing for the Washington Post, described one prevalent hypothesis, linking the attacks to the QAnon conspiracy group, which has had a growing following in Germany since the outbreak of the coronavirus pandemic. In particular, one prominent follower of QAnon, a chef named Attila Hildmann, has linked the Pergamon Museum with QAnon’s belief in a global Satanic child-sex-trafficking ring.

As reported by The Washington Post, “[Attila] has described the museum’s Pergamon Altar, a 2nd-century B.C. artifact built in ancient Greece during the reign of King Eumenes II, as the throne of Satan and a site for child sacrifice.” German news sources reported that Hildmann had called on his followers to storm the museum in August.

According to Hildmann’s baseless theory, German Chancellor Angela Merkel had performed human sacrifices on the altar – a claim that some believe may have  inspired the oil attacks on the museum – though why, if the Pergamon Altar was the focus of their ire, the attacks were so widespread, remains inexplicable.

Whatever its motive, because of the renewed focus on museum security it has prompted, the vandalism will probably ultimately strengthen the museums it targeted. These five buildings and the art they contain have collectively survived almost one hundred years of history – a history that included wars, bombings, and a wall dividing their home city in two. The Museuminsel was not sunk by those storms, and it is unlikely to be lastingly troubled by this latest disturbance.

New research by German online news source Zeit Online and public radio Deutschlandfunk has uncovered oily vandalism at two other locations in the months preceding the attacks on Museuminsel. In July, Wewelsburg Castle in the state of North Rhine-Westphalia reported that fifty objects had been marked by an oily substance and in late September, the Cecilienhof Palace in Potsdam reported that it too had objects that had been marked.

In a November 19, 2020 article for Zeit Online entitled Ein weiterer Ölanschlag (Another oil attack), reporters Stefan Koldehoff and Tobias Timm speculated on a connection between the three sites. No one has yet come forth to reclaim responsibility.
Koldehoff and Timm raised possible right-wing extremist motives for the vandalism. The Wewelsburg Castle was a center for the Nazi Schutzstaffel (SS). Cecilienhof Palace was the site of the Potsdam Conference where the USA, Great Britain and the Soviet Union met at the end of World War II to discuss, among other subjects, the dismantling of Nazi Germany.

“In the so-called Obergruppenführer hall in the north tower of [Wewelsburg] castle, which the National Socialists used between 1933 and 1945 as a place of worship, pilgrimage and meeting place for SS leaders, there is a large floor mosaic made of dark green marble with the so-called black sun.” Koldehoff and Timm explained.

The sun serves as a unifying symbol in neo-Nazi and other alt-right circles around the globe. They noted, “On July 12, employees discovered that around 50 objects in the district museum at the castle had been damaged with oil – including historical landmarks, mantels and the reproduction of a cycle of paintings. There were also traces of oil in front of the locked hall with the black sun.”

In theorizing that there were right wing extremist motives for the attack on Cecilienhof Palace, Koldehoff and Timm stated that
“The defeat in Cecilienhof, which was also confirmed under international law, and the end of the National Socialist German Reich were not recognized by the right-wing extremist Reich citizens movement.” They continued, “The attacked amazon sculpture is in the former study of the American delegation. Further traces of oil were found in the fireplace room and in the room in which the historical exhibition on the history of the palace and the Potsdam Conference is introduced.”