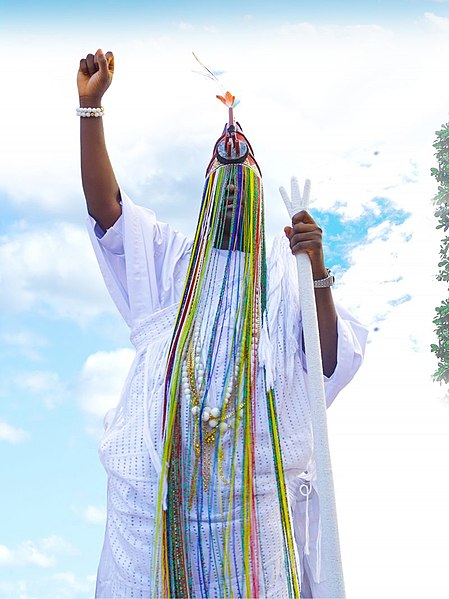 Oba Adeyeye Enitan Ogunwusi, the 51st and current Ooni of Ife, wore the Ade-Are in public for the first time at the Olojo 2016 festival, 14 October 2016, Author House of Oduduwa, CCA-SA 4.0 International license. 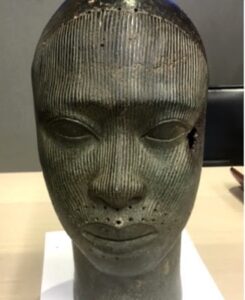 A magnificent life-size Ife bronze head, one of nine artworks, was stolen from the National Museum of Nigeria in Jos in 1987. The theft was documented – the thieves broke in and viciously attacked a guard – but the Nigerian authorities failed to identify the culprits. They did, however, notify both Interpol and UNESCO, which published a brochure giving international notice of the crime.

The trail of most of the stolen items went cold, and nothing was heard of them for a decade. After a seizure somewhere or possibly an abandonment – the dates and circumstances are unknown because the court of first instance in Brussels cannot find any records, the head ended up in storage in the Brussels Palace of Justice. It gathered dust there for years until the Federal Public Service Finance department organized a public sale of seized items. In the description? “A lot of African art.”

A reputable Flemish general antiques dealer bid at the little auction in Molenbeek in 2007, purchasing the Ife head for 200€, plus a 40€ service charge – he also bought an acoustic guitar for 72€. He took the head home and didn’t do anything with it for another ten years – there is no indication that he realized he had purchased an Ife masterpiece worth perhaps €5 million. Authentic heads of this type are so rare that he could be forgiven for thinking it an old copy. 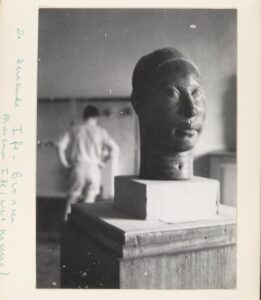 Babatunde Adebiyi of the Nigerian Commission for Museums and Monuments told the press: “We are very sorry that this trail was never thoroughly investigated. This is a very important case that we absolutely want to solve. Perhaps we could have found the thieves this way.”

Adebiyi also intimated that the dealer knew or should have known of the theft, claiming that appeared on the ICOM Red List of African Archaeological Cultural Objects at Risk. However, , another object from the museum had turned up at a Swiss auction in 1990, just a few years after it was taken. And although that piece was recognized and returned to Nigeria within a much shorter time, no more was learned about the theft in that instance. Further, the Red Lists show items from museums, not items identified as stolen, and the bronze Ife head shown in the ICOM Red List is not identified as stolen. Although similar to the Belgian dealer’s head, it is obviously not the same.

The Flemish dealer was upset when he learned the head had been seized. He had bought the head in good faith and had a receipt from the Belgian government to prove it. Babatunde Adebiyi came to Belgium to discuss the matter. The Belgian antique shop owner insisted the head was his. Eventually, he said he would accept €60,000 for the head, although it is worth about 100 times that. Adebiyi said this was an insult to Nigeria. “It’s about principle for us,” he said. “We don’t want to set a precedent by putting money on the table for something that belongs to us.” The Belgian government said the disagreement was none of its business and refused to get involved.

Further negotiations were unavailing. The investigative reporters from VRT who identified and were following the case spoke to Julien Volper, curator at the Royal Museum for Central Africa in Tervuren. Volper had a commonsense solution: 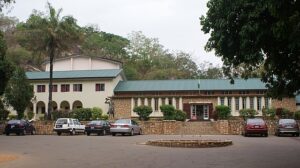 “I personally think that the Belgian government can resolve this matter quickly. Belgium can do that by paying 60,000 euros to the current owner of the head. That is a piece of cake compared to the real value. I think the government would do well to settle this affair as soon as possible, because nobody disputes that the piece was illegally traded. It is better to focus on that than on returning to Congo numerous objects from the Museum of Tervuren, which are legally owned by the Belgian state.”

“In the 1980s and 1990s there have been further thefts in museums in Nigeria, including the museum in Jos. Several Ife pieces were stolen. No doubt Nigerians were also actively involved in those thefts. We need to find out how those pieces were stolen. and how they were then marketed in the West. This is not just a Western affair.” 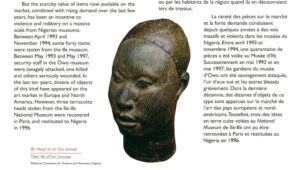 In response, Babatunde Adebiyi was adamant that whether Nigerian museums were safe or not was not the point. “The bronze head is ours and it must be returned to Nigeria.”

And what is the response of the Belgian government? Just a week after the first investigative report appeared in VRT, the East Flemish prosecutor announced an investigation into the art dealer who originally purchased it at a government auction. The prosecutor “hopes to discover whether the dealer was aware that the artefact was stolen when he bought it at auction and when he later tried to resell it in London. If so, he could be charged with trading stolen goods.” This appears to be an attempt to cover up the authorities’ blunder in failing to recognize an artwork by blaming the dealer who bought it for nothing at a government auction – a transparently bullying reaction to being caught in a serious error.