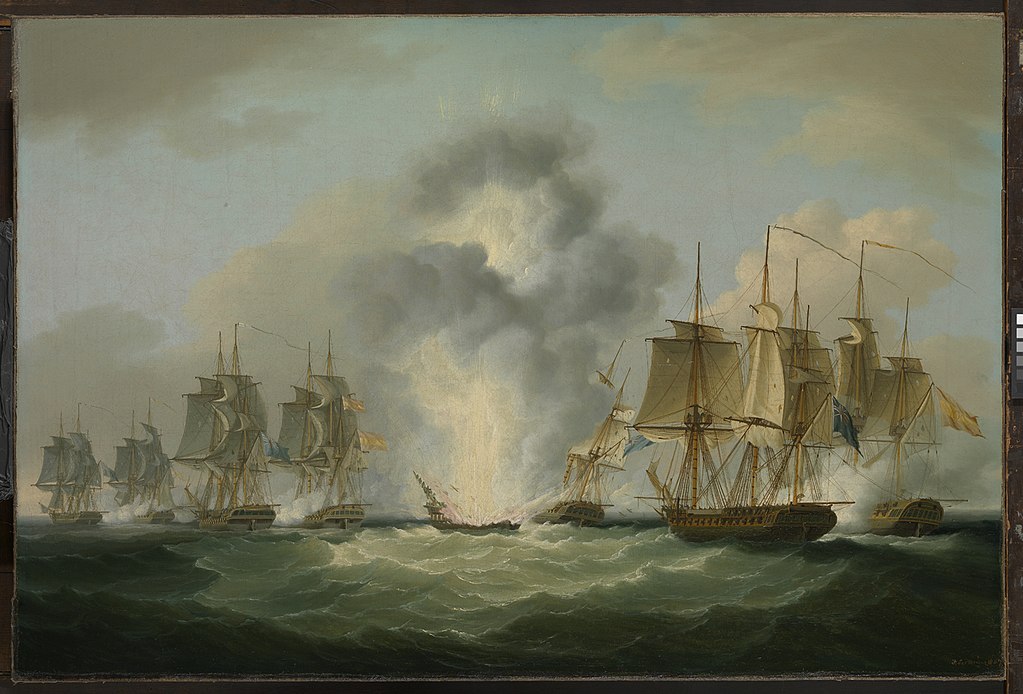 Four Spanish frigates with a rich shipment from Montevideo headed for Cadiz. The cargo was ultimately destined for France and therefore potentially for use against the British. Four British frigates lay in wait to capture them and the two squadrons met on 5 October, 1804.

The governments of Spain, Colombia, and a private salvage company, Sea Search Armada (SSA), are battling over rights to the richest cargo ever discovered on the ocean floor. The San Jose was headed from the New World back to Spain in 1708, during the War of Spanish Succession. The ship is believed to have been carrying from $2-17 billion in current value of Inca gold and silver, Panamanian pearls, and emeralds and other precious stones from the Andes. The ship was attacked by a British squadron led by Admiral Charles Wager, but before it could be boarded and the treasure seized, its powder magazine blew up and the vessel sank with almost all hands. The wreck was known to be located near to the port city of Cartagena.

Colombian president Juan Manuel Santos described the discovery of the Spanish treasure ship as having been made by a team of international experts, the Colombian national archaeological institute, and the Colombian navy. He said the discovery   “constitutes one of the greatest – if not the biggest, as some say – findings and identification of underwater heritage in the history of humanity.”

The dispute over the treasure has a lengthy history. In 1982, a private company, Sea Search Armada (SSA), announced that it found the wreck’s location. Sea Search Armada then entered into a partnership with the Colombian government to excavate the wreck, but the Colombian parliament later repudiated the contract and the matter has been tied up in lawsuits in various countries for decades. After Colombia’s December announcement, Spain also disputed Colombia’s claim. Spain’s Foreign Minister, José Manuel García-Margallo, said that international Law of the Sea gives rights to this kind of shipwreck to the flag of the state that is the original owner. Colombia is not a signatory to the treaty, however.

In a lawsuit involving Sea Search Armada in 2007, the Colombian Supreme Court declared the galleon the property of the Colombian state, but that the treasure should be split equally with SSA. Sea Search Armada then sued Colombia twice in US court. One lawsuit was dismissed on technical grounds; in the end, a US court declared the San Jose the property of the Colombian state. Nonetheless, SSA has other claims based on their prior agreement with the government of Colombia.

Colombia’s Minister of Culture Mariana Garces-Cordoba said earlier this month that the San Jose is not where the company claimed to have found it in 1982. He invited SSA to demonstrate exactly where the wreck is located in order to prove its claim, and said that if SSA can pinpoint the location, then it can share in the treasure. SSA’s manager says that Colombia would have had to violate an order from their own courts not to search using SSA’s information even to make that location determination. In an article about the claim, National Geographic points out that location technology from the early 1980s was far less sophisticated and even if located to the best of the technology’s ability at the time, the wreck may be 1/8 of a mile off from the coordinates given.

Spain is waiting to see the results of the dispute between SSA and Colombia. Spanish cultural secretary, José María Lasalle stated that Spain was examining the information provided by Colombia before deciding “what action to take in defence of what we consider to be our sunken wealth and in accordance with Unesco agreements that our country signed up to years ago”.

The War of Spanish Succession (1701-1714), was triggered by the death of Charles II, king of Spain, who was both mentally and physically disabled and died in 1700 without an heir. On his deathbed, Charles II named Philip, Duke of Anjou, the grandson of King Louis XIV of France, as his heir. At the end of the 17th century, Spain’s influence in Europe was diminishing, but her overseas territories included the Philippines, the Spanish West Indies, Florida, parts of North America, most of South America and important North African cities – the largest of the European overseas empires. The English, Dutch, and Austrians feared that naming Philip as King of Spain would give inordinate power to France, and declared war. A series of protracted European conflicts eventually were substantively resolved though the partitioning of much of the Spanish Empire among the European powers in the Treaty of Utrecht (1713) and of the Treaty of Rastatt (1714).