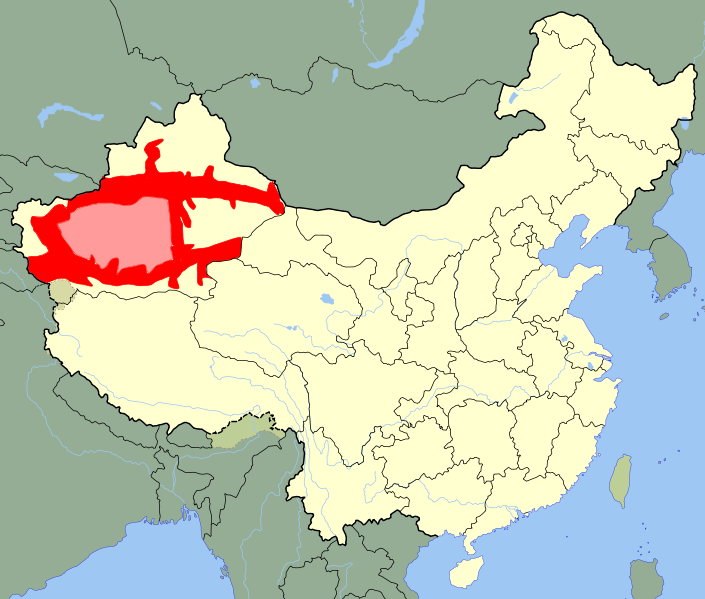 In red is the geographical extent of the Uyghur language within China. Pink is sparsely populated, but assumed predominantly Uyghur speaking. Created from File:China blank map.svg and information from the CIA 2010 China linguistic map, February 6, 2012, by Quigley [CC0], Wikimedia Commons.

“We are witnessing in Xinjiang today a remarkable human reengineering project that seeks to remold Xinjiang’s Muslim population by eradicating non-Han Chinese languages, religious practices, cultural habits, and dissident thoughts in the name of literally manufacturing what Xi Jinping calls “enduring peace on the ethnic frontier.””

In late March 2019, the Association for Asian Studies (AAS) hosted its annual meeting of more than 3000 academics, graduate researchers, and Asian specialists in Denver, Colorado. The AAS is a nonprofit, nonpolitical international professional organization comprising some 7,000 members globally. Among the hundreds of programs and panels presented in Denver, almost half were focused on China studies.

At the close of the conference, on March 28, 2019, the Association for Asian Studies issued an unusual announcement, AAS Statement on Extra-Judicial Detention of Turkic Muslims in Xinjiang, PRC, condemning the detention “of at least 800,000 and up to 2 million Uyghurs and other Turkic Muslims in political “re-education centers” in Xinjiang, Northwest China,” calling it, “a major violation of human rights and, in the case of our academic colleagues, a clear disregard for academic freedom.”

“We are particularly dismayed at the disappearance of at least 386 Uyghur intellectuals and scholars, including 21 staff of Xinjiang University, 15 staff of Xinjiang Normal University, 13 staff of Kashgar University, 6 staff of Xinjiang Medical University, 6 staff of the Xinjiang Social Sciences Academy, 4 staff from Khotan Teachers’ College, and 101 students.3 Turkic Muslims have been denied the freedom to use their mother tongue, to pursue Qur’anic studies, or to study and research abroad.4 Those returning to China from periods of study or research have been recalled, detained, questioned, or caused to disappear into internment camps.5 Five deaths of students and scholars while in custody have been confirmed during this period.6”

The statement was signed by Association for Asian Studies President Prasenjit Duara, on behalf of the AAS Board of Directors.