Art in the Time of Facebook: Prehistoric Sculpture Censored By Social Media 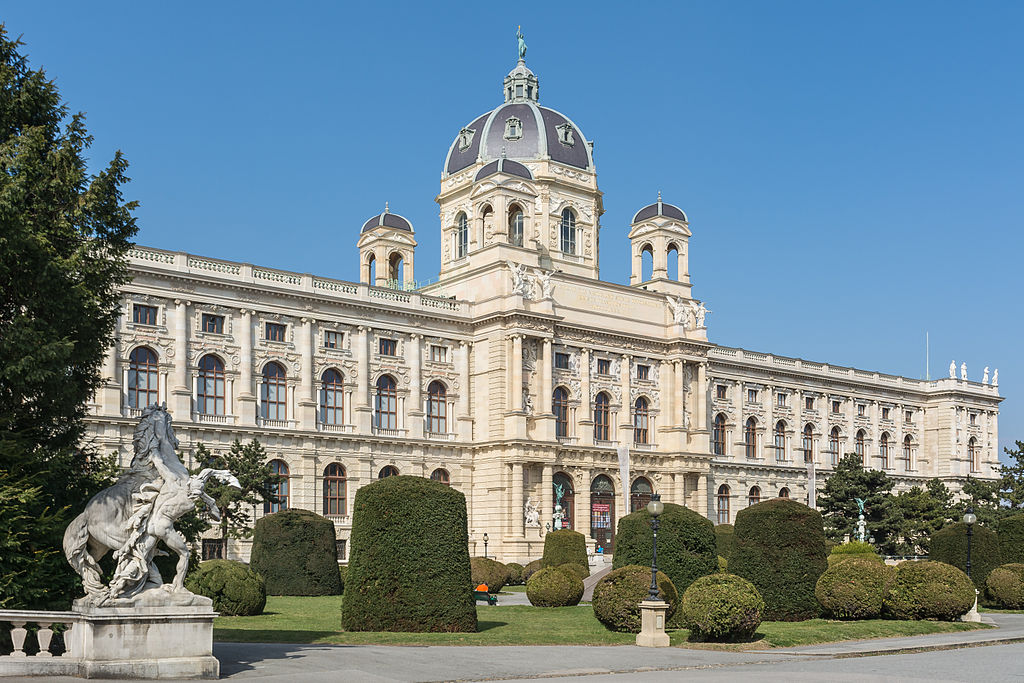 The Venus of Willendorf is a limestone figurine, probably carved between 25,000 and 28,000 BCE. It depicts a corpulent nude woman with exaggerated breasts and pudenda, tiny arms, and no facial features. Her bowed head is crowned with what might be closely braided hair and might be a woven cap. Though not the oldest known representation of a woman, it is one of the most recognizable Old Stone Age artworks in the world. This ancient sculpture was recently the focus of a quintessentially modern online controversy, involving Facebook’s content guidelines, a self-proclaimed independent activist, and the Austrian Natural History Museum.

The small figurine at the heart of the controversy has long been known to academics and art historians. The Venus was excavated in 1908 near the Austrian town of Willendorf, at a site which contained remnants of dwellings, but gave few clues to the original use of the figurine. (The name “Venus,” by which the statue has been known ever since its discovery, is a label of convenience – a misnomer, in some minds, which imposes an anachronistic and unfounded religious significance on a prehistoric object of unknown significance.) After excavation, the Venus was transported to the Imperial Natural History Museum in Vienna, which had sponsored the dig. 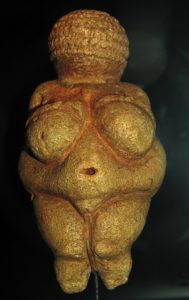 Although the Viennese Natural History Museum is no longer an imperial institution, it still occupies its original Neo-Baroque building on Maria-Theresien-Platz in the heart of Vienna, built for this express purpose by Emperor Franz Joseph in 1889. The museum houses thousands of plant and animal specimens, geological samples, and a few archaeological and historic curiosities. These last include a specious “basilisk” in a jar, Iron-Age bronze figures, a seventeenth-century snuffbox made of Afghan lapis lazuli, and, of course, the Venus herself. Many of these objects are the legacies of older princely collections, and have rested within the museum’s walls for more than a hundred years, while the political, military, and humanitarian crises of the twentieth century raged outside.

Directly across from the Natural History Museum is another building, its mirror image, save for the sculptural detailing: the Kunsthistorisches Museum. The Natural History Museum’s companion institution houses Vienna’s greatest art collection, one of the finest assemblages of European art in the world. In this impressive context, surrounded by other artworks and natural and historic artifacts, the Venus of Willendorf is immediately recognizable as an object of scholarly interest and aesthetic value.

On Facebook, on the other hand, the Venus is an obscenity.

In late 2017, Italian Facebook user and self-identified activist Laura Ghianda attempted to post an image of the Venus of Willendorf on her personal Facebook page. The image was immediately blocked by Facebook’s content filter and flagged as pornographic. Ghianda reportedly challenged their ban four times, and four times her appeal to have the image sanctioned was rejected.

The social media giant was immovable on the point until the Natural History Museum itself entered the dispute in January of this year. The museum decried Facebook’s actions on its Twitter account on January 9th, writing (in a German-language post), “we think that an archeological object, especially such an iconic one, should not be banned from Facebook because of ‘nudity’, as no artwork should be.”

The site did not issue an apology for the mistake until early March, after the story had become a minor cause célèbre for art and expression advocates worldwide. Since The Art Newspaper picked up the controversy in late February, it has been covered by many news outlets, including Business Insider, The Daily Mail, Jezebel, and the technology-focused online news service Science X. The breadth of the coverage reflects the genre-bridging nature of the controversy itself. It is a case of the Stone Age clashing with the Age of Technology, the individual challenging the corporate, and art confronting the algorithm.

Taken out of the affirming, legitimizing, and intellectually liberal environs of a public museum, the Venus lost its privileged status as an artwork. Context is key to understanding a work of art; as Christoan Koeberl, director-general of the Viennese museum noted in a statement to Business Insider: “There has never been a complaint by visitors concerning the nakedness of the figurine.” Even more important for the statue’s reception than the change of venue from museum to social media, is the change in the nature of the audience judging its merits, from human beings to technology. That the censorship of the Venus initially occurred without malicious or oppressive intent does not lessen its significance; if anything, the importance of the incident is heightened by its happening accidentally and automatically.

The image of the Venus was not red-flagged by an employee of Facebook, but by an algorithm – a tool without the capacity to form aesthetic judgements, or to consider the meaning of an image as well as its content. The role of the human capacity to form a subjective judgment of the merits of a work of art has had legal significance before now.

In 1964, the state of Ohio attempted to ban screenings of the French film Les Amants on grounds of obscenity. The Supreme Court was able to overrule its decision partly because of the Justices’ capacity to judge the work’s significance in a considered and thoughtful manner. Justice Potter Stewart wrote in his assenting opinion that, while he might not ever be able to offer a strict definition of the “hard-core pornography” which would not merit Constitutional protection, “I know it when I see it, and the motion picture involved in this case is not that.”

The Ohio case is famous for two reasons: for Justice Stewart’s widely quoted phrase, and for the difficulty which the court had in coming to its decision. Although four Justices affirmed the right of the plaintiff to show the film, two sided with the state of Ohio, and even those who agreed with each other about the verdict presented different reasons for their assent. This, too, is significant; sometimes, when interpreting a work of art, the answer to questions such as “is this obscene?” or “is this meaningful?” is both yes and no. It is the prerogative of art to be ambivalent, as it is the prerogative of computer programs to be definite. In the new Age of Technology, we must rely upon challenging works of art to remind us of the existence of the indeterminate and nebulous, in the outside world and in ourselves.

It is illuminating to compare the progress and outcome of this controversy with a similar recent incident. Facebook is currently involved in legal proceedings in France over the disputed de-activation of a man’s Facebook account. The de-activation occurred immediately after he posted a picture of the painting L’Origine du Monde, by nineteenth-century French painter Gustave Courbet. Facebook denies that the post containing the image (which was, in fact, a link to an article about the painting), was the cause of the de-activation, but has not offered any alternative explanation.* 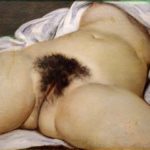 L’Origine du Monde is in the collection of the Musée d’Orsay, in Paris. It was flagged as pornographic by Facebook because of its detailed depiction of a woman’s genitalia. Like the director-general of Vienna’s Museum of Natural History, representatives of the French museum were quick to decry the apparent censorship, and defended the image’s right to appear on social media on the basis of its artistic merit. According to the French museum’s online collection catalog, the painting transcends mere pornography through “Courbet’s great virtuosity and the refinement of his amber colour scheme.” Though the museum’s statement appears in the neutral context of an online catalog entry, the lawyer for the plaintiff in the related lawsuit has made a similar argument in his suit, rendering the artistic merits of a purportedly obscene work once more a matter for the courts to consider.

Open, public attempts by authorities to suppress material can have the counter effect of heightening public interest in the work. As great British author P.G. Wodehouse once wrote, “all American publishers hope that if they are good and lead upright lives, their books will be banned in Boston.” When the censorship happens instantly, silently, and automatically, on the other hand, the censored content may be lost forever. Online filtering programs ensure that impermissible images are erased before they have a chance to be seen and appreciated by anyone but the algorithm. This poses a potential threat to the liberty of expression and of art historical study online.

In the case of the Venus, art appears to have won the battle, but it is impossible to know how often these acts of automatized censorship occur and pass unchallenged by users too intimidated or too pressed for time to resist. This kerfuffle over a single image may be indicative of a coming age when art on the edges of morality is endangered.

It may not seem too important that Facebook, or any other single platform, bars a few old artworks from its pages, either deliberately or accidentally. It is worth considering, however that the act of censoring an image not only bespeaks its unacceptability in a particular context, but implies its impropriety in a more permanent sense. That which cannot be displayed somewhere is at least questionable everywhere. As Facebook increasingly becomes the platform on which people worldwide seek friendships, news, and entertainment, what it does and does not allow to appear on its pages may come to determine what is and is not understood and protected by society as a whole. Artworks of all kinds should continue to be part of that grouping of valued subjects.

* Update March 16, 2018 A French court ruled on March 15, 2018 that Facebook, “failed to fulfill its contractual obligations by closing [a user’s account] without prior notice,” but that no damages had been shown by the teacher, Frederic Durand-Baissas. Durand-Baissas had posted the censored image in a link to an article about the painting L’Origine du Monde by Gustave Courbet. The court said that the Facebook user “didn’t prove the deactivation was caused by his posting” of the 1866 painting. The lawyer for  M. Durand–Baissas, Stephane Cottineau, stated that he was disappointed, and pointed out that the court had not addressed the issues of pornography or censorship.