Apsáalooke Women and Warriors in Chicago 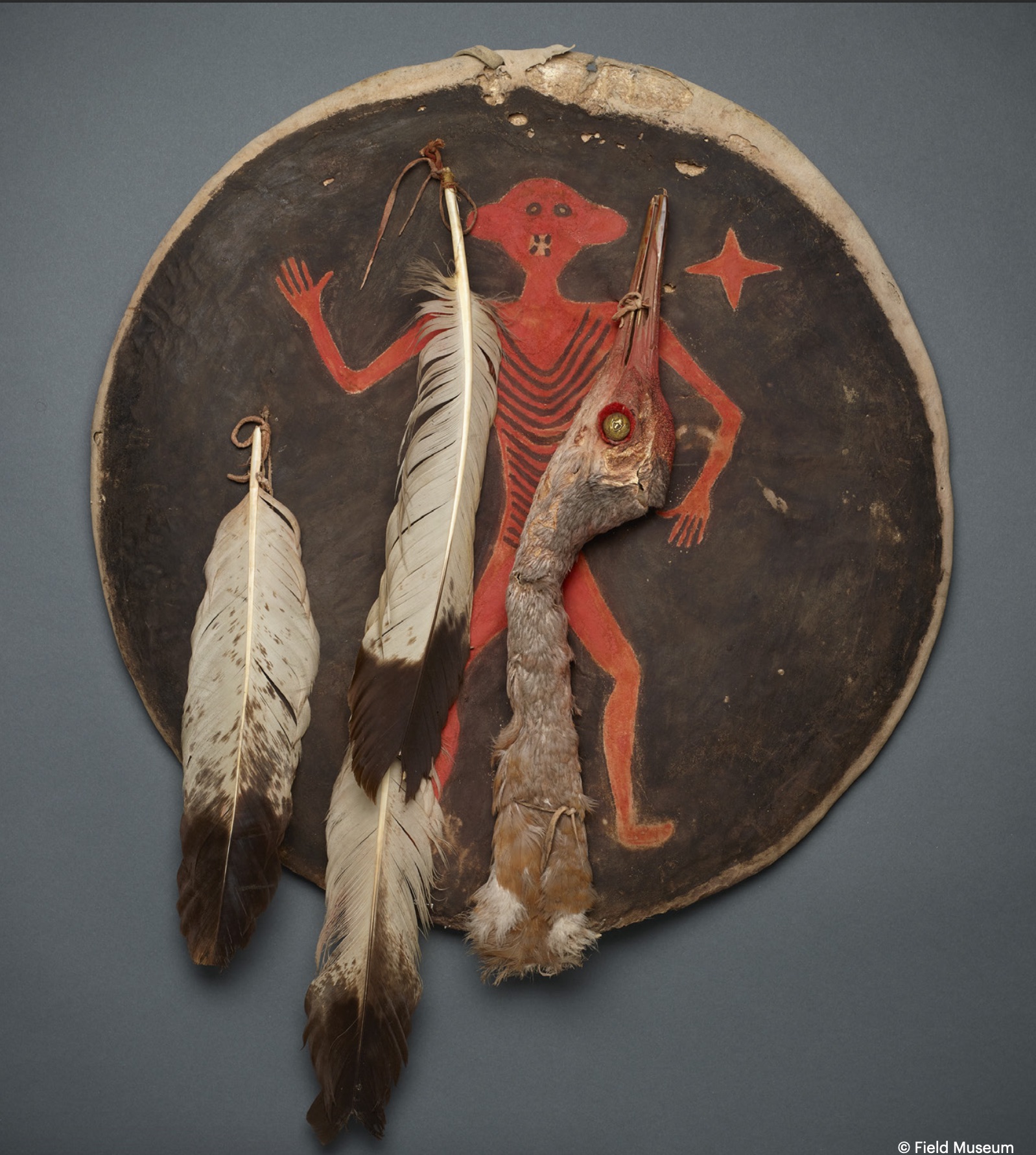 War shield owned by Wraps His Tail, buffalo hide, the head of a crane, feathers, and natural earth clay pigments. The maker and owner of this shield, Chíischipaaliash, or Wraps His Tail, led a rebellion against the US government in the 1880s. © Field Museum photo by John Weinstein. 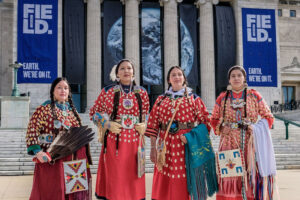 “I hope this exhibition helps people to honor their own cultural experiences in new ways and to identify with Indigenous people—to realign ourselves as Americans and understand that this is a very diverse country.”

Nina Sanders (Apsáalooke), guest curator of Apsáalooke Women and Warriors, at the Field Museum until April 4, 2021.

When Chicago’s Field Museum reopens, visitors to its ticketed galleries will see the museum’s first Native American-curated exhibition, Apsáalooke Women and Warriors, an interactive exhibit that brings together the Field Museum’s never-before-shown collection of early painted and decorated shields from the Apsáalooke or Crow tribe, with contemporary works by Apsáalooke artists and craftswomen. The works and didactic materials center on the roles of male warriors defending the community through martial prowess and on women as protectors of social institutions and ethical practices within Crow culture. Both subjects emphasize the resilience of Crow culture and how essential women artists have been in preserving tradition and creating new works inspired by it.

In Apsáalooke Women and Warriors, curator Nina Sanders says she sought to build a positive, “forward-thinking” portrait of the Crow nation rather than demonstrate the collapse of traditional culture – in part by melding antique objects with contemporary works by living Native American artists. She wanted to think beyond this one exhibition and to change how Native American art was exhibited in the future by bringing together Native artists, Field Museum staff and private collectors of Apsáalooke art and artifacts with close ties to the Crow community.

Apsáalooke Women and Warriors includes a complementary exhibition at the Neubauer Collegium for Culture and Society, where artworks are displayed within a fabric-based environment. Objects are both in vitrines and accessible to the public, placed around and within a nine foot tall tipi-like construction where visitors are encouraged to touch and experience them. 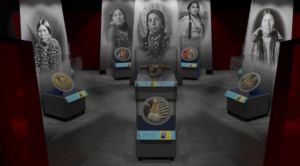 Sanders explains in the lavishly illustrated catalog, published by the Neubauer Collegium and distributed by the University of Chicago Press, that accompanies the exhibitions:

“Our shared investment brought more than twenty Apsáalooke people to the Field Museum and the University of Chicago, and Apsáalooke hosts welcomed thirteen partners from the Field Museum and the University of Chicago at the annual Crow Fair celebration. Together we worked to honor the cultural legacy of the Apsáalooke people, and reimagine the work—and future—of cultural institutions with a colonial heritage. I am proud to say that we labored together creatively—over shared meals, through the exchange of gifts, and, most importantly, with mutual respect.”

Instead of presenting objects chronologically or rigidly divided by materials or technique, the exhibition counterposes and blends contemporary and antique pieces, showing images of creative women past and present together with objects and representations of the Apsáalooke warrior past. The result is to show the museum visitor the Apsáalooke as people not locked into the past, but continually inspired by and growing from it. Nina Sanders writes: “Our ultimate goal is to deliver our own narratives, write our own scholarship, and educate the world about our cultures, worldviews, and experiences.” 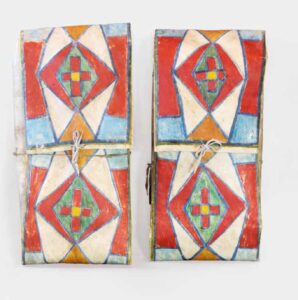 Several other Apsáalooke women, writing in the catalog, explain how the pairing of women’s arts with the Crow tribe’s warrior history emphasizes the mutual support between male and female roles that has enabled the Apsáalooke to endure tribulation and change and to survive as a culture. The contributors to the exhibition are not only creators reworking traditional culture, designing costumes, beadwork and jewelry and creating innovative museum environments. They are also professionals in teaching culture, contemporary fashion designers and more. Giving back to the community draws them together. JoRee LaFrance, a young Apsáalooke who is shown in the exhibition riding at the head of a group of mounted women wearing an elk-tooth decorated dress, went to Dartmouth, took a PhD in water science and is assisting her community back on the reservation with environmental issues. Each of the collaborators in the exhibition is determined to play a role in the future of the Apsáalooke people.

As Veronica Bayerle writes in the catalog,

“We are warriors in a traditional sense, but we are also warriors who are defending and reifying our way of life, reclaiming and redirecting how we define what is authentically Apsáalooke. This exhibition exemplifies a way to look beyond a damage-based approach toward Native culture, redirecting us to embrace what we have and the possibilities for the future: Apsáalooke are resilient.”

Remarkable Shields from the Collection of the Field Museum 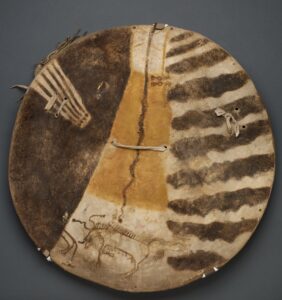 One room in the exhibition displays photographs of important Apsáalooke women, each over a shield, emphasizing that while warriors made battle shields, women are, in a sense, their spiritual keepers. The presentation of Crow shields from the collection of the Field Museum is a remarkable display of the inherent power of objects. It is complemented by the early photographic images of women whose skills and strengths held their people together.

JoRee LaFrance’s contribution to the catalog describes the power of shields:

“Apsáalooke warriors’ shields also hold the unique ability to change weather. Apsáalooke warriors painted depictions of night and day, the landscapes, sky, and their Helpers on their shields. One such shield contained so much power that ethnographer Stephen Chapman Simms, the former director of the Field Museum of Natural History, wrote in his 1900–1903 field notes, “On occasions when asking to see shields, the old man declared if they exposed the shields it would rain and hail and on both occasions it did—the sky was clear and [then] was thundering.” The natural world has always assisted Apsáalooke people, especially in their time of need, and for that we are eternally grateful.”

The exhibition is unusual in that it brings together collaborators from the tribal, art collector, and museum world. Native American objects never before seen from the Field Museum collections are included, and so are works loaned by art dealers and private collectors. Don Siegel, a contributor to the exhibition, described the emotional scene at the Field Museum, when museum staff opened its storage facilities to visiting Apsáalooke tribal members, including elders, and brought out shields collected by the ethnographer and former director of the Field Museum, Stephen Chapman Simms around 1900. The Field Museum has the largest collection in the world of antique Apsáalooke shields, numbering some sixty shields. The elders were deeply moved, surprised and pleased to see the shields, which they had not known existed in the Field Museum collection, and many of which had never before been exhibited.

Many shields were made for young men returning from ceremonial spiritual experiences; they would describe their visions to their fathers or to elders, who created the shields for them to reflect their unique vision. Unlike shields made by certain Southwestern tribes, Apsáalooke shields have not been sought for repatriation under NAGPRA. Shields were of great importance, but are regarded by the Apsáalooke as personal objects belonging to individuals, not to the tribal community. They could be sold, passed down among the community or to others, even thrown away if they were not thought to be effective in working to protect the owner. Generally, it was felt that, like other objects imbued with sacredness or spiritual power, they were important when used by their owners, but considered ‘dead’ once they left their owner’s possession. 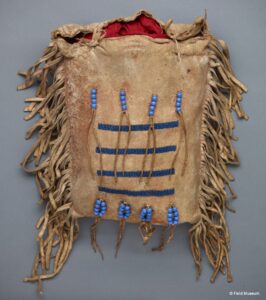 The history of the Apsáalooke people, as told in the exhibition, begins with their creation story and a display of venerated objects, historic tobacco bundles, intrinsic to their identity as a unique people.

Marty Lopez, an Apsáalooke tribal member pursuing a PhD in visual anthropology and teaching at the University of Montana, tells the creation story in the exhibition and catalog:

“No Intestines was instructed to find the Sacred Tobacco plant. The people who followed him to this plant would come to be known as the Apsáalooke. When No Intestines saw the plant for the first time, he saw shimmering lights. This happened at Extended Mountain, in the Bighorn Mountains. From that day forward, the Bighorn Mountains have always been the center of Apsáalooke country. The Sacred Tobacco plant was sparkling like stars. In fact, the Apsáalooke view the seeds of the plant as actual stars.”

Nina Sanders writes in the catalog:

“It is with permission from Apsáalooke Tobacco Society members that we are allowed to show you the Sacred Tobacco Society bundles and share our narratives. It is believed by our people that these items should be seen and remembered. They are at the core of Apsáalooke existence and well-being. We do not look inside other people’s tobacco bundles without permission. These items are highly sensitive and powerful and must be approached and treated with deep reverence.”

The inclusion of some twenty antique Apsáalooke objects in the exhibition from the collection of Don and Liza Siegel came about in part because of the Crow tribe’s tradition of adoption of even non-Indian individuals into families in the tribe. The Siegels, who have been involved with Apsáalooke artists for many years, are not just collectors of Native American art, they are related through a formal adoption process to several of the women artists whose work appears in the exhibition. Fifteen years ago, Don Siegel was adopted into a family whose legacy includes Crow elders honored in the exhibition. Liza was adopted into a different Apsáalooke clan more recently. The Siegels and their Crow families’ lives are now deeply and permanently entwined, with mutual responsibilities to not only close relatives among the Apsáalooke but to the Crow community as a whole. Don Siegel says, “These are two different worlds. We understand that we are on the outside, but we have been invited in. We study the language, we try respectfully to learn all we can, and while we are not Indian, and never will be, these are ties as meaningful as those of blood. Life is very hard for people on the reservation so we are working to help Crow kids from our family and their friends to get an education. We are honored to have been made part of our Crow families and we take our relationship very seriously indeed.” The Siegels not only sourced and lent antique objects to the exhibition – they commissioned works for it, including several paintings by young Apsáalooke artist Ben Pease. “It’s a privilege to be working with Nina [Sanders],” he says, “following her lead.”

As Veronica Bayerle states in the catalog: “Our sense of tribal identity is deeply influenced by the culture of adoption, the growth of relations that permeates our societies and clans, and the strong belief that visitors are a blessing.” 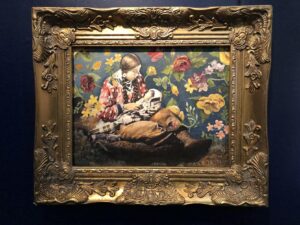 The exhibition features a number of contemporary paintings by well-known Crow artist Benjamin “Ben” Pease, in which women’s skills and strengths are celebrated as much as the warrior tradition. Other contemporary works featured in the exhibition are a nine-foot-tall modern tipi with a door painted by Mona Medicine Crow, beaded regalia by Lydia Falls Down, displayed on a life-size horse model, and numerous fashion originals created by B. Yellowhair that were inspired by historic Apsáalooke collections.

Due to the coronavirus, the exhibition was closed on the day it was scheduled to open – March 13, 2020, but when the Museum reopens, it will have an extended stay at the Field Museum until at least April 4, 2021.