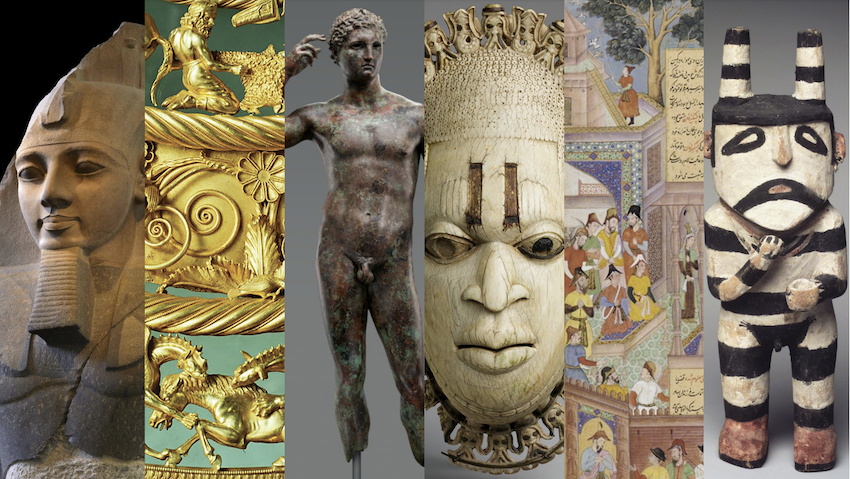 The Committee for Cultural Policy is a small but active think tank established in 2011 to strengthen the voice of art museums and collectors in the public debate on arts policy.

What do we do? We educate, by providing free global access to our in-depth publications on cultural policy, including a series on global heritage law in collaboration with UK nonprofit Trust Law. Our online journal, Cultural Property News, which reaches 10,000 museum professionals, collectors, art market participants, and academics, has published more than 400 articles on cultural heritage and art law in the last seven years.

We advocate, by testifying on behalf of the interests of art museums and the supporting public before US government agencies and at international conferences.

We champion the cultural property interests of ethnic minorities subject to hostile regimes before Congress and US agencies, by providing legal support for U.S. minority and diaspora organizations.

This year we are undertaking a major book publication project covering the drastic changes to public policy on cultural heritage and its effects on museums and the circulation of art worldwide.

Our voice is critical. Your generous support will enable us to continue our important work.

Thank you for your consideration and your support. 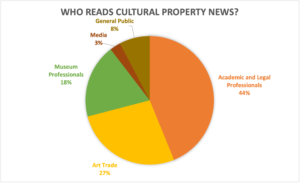 The Committee for Cultural Policy brings a public museum and private collector focus to the U.S. and international dialog on cultural heritage. Our bi-monthly Newsletter continues to deliver the latest news on art and cultural heritage free to readers everywhere.

There are 10,000 current subscribers to the Cultural Property Newsletter and over 400 articles on our no-firewall website culturalpropertynews.org, from ‘shorts’ to 5,000+ word feature and investigative articles and major reports on art and policy from around the world. Readers can also reach and share our work via Twitter and our Instagram page.

Here are just some of Cultural Property News Articles in 2022… 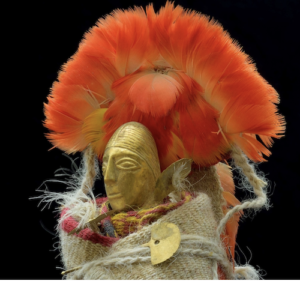 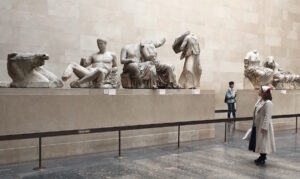 The Parthenon Marbles at the British Museum. 2017. Cultural Property News.

Plus “The Careful Collector,” a Popular Monthly Series by Peter K. Tompa, also included in the Museum Trustee Association Newsletter

Don’t Import Buyer’s Remorse
Great Catsby is Life of the Party
Not as Rare as You Might Think!
The Riddle of the Native American Eagle Headdress
What’s it Worth? Friends Find Value in Family Heirlooms
Why does a French auction house want to know so much about me?
Fakes and Alterations: Hana Hunts for Vintage Uke with Few Strings Attached
What to do with Your Ivory Keyed Piano?
Will my African Art be Repatriated as Reparations for a Colonial Past? 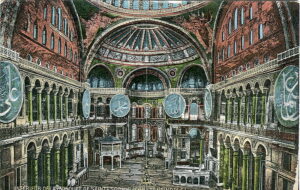 National ownership claims for all antiquities are driving U.S. and European cultural policy. At the same time, policymakers have ignored important causes of heritage loss: government dysfunction, lack of funding for law enforcement, site protection against illegal development and climate change. The State Department continues to sign and expand MOUs with States that are notorious for human rights abuse and corruption.

In 2023: CCP will present testimony on scheduled renewals with Algeria, Bulgaria, Cambodia, Honduras, and China. Hearings have just been scheduled in January 2023 for new MOUs with Uzbekistan and North Macedonia. 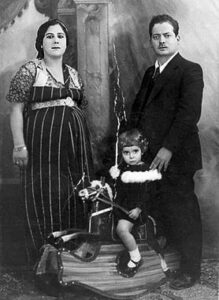 Gamila and Reuven Falah with their daughter Yola. Tripoli, Libya, circa 1932. Beth Hatefutsoth – Archive, The Nahum Goldmann Museum of the Jewish Diaspora.

In 2022: CCP worked together with representatives from key religious and minority groups in the U.S. in voicing objections to the State Department’s repeated signing of MOUs with authoritarian Middle Eastern and North African (MENA) governments.

“…no issue is of greater importance to the Jewish community than the rights of the nearly one million Jewish refugees from the Middle East and North Africa. These refugee populations have been largely ignored by the international community, despite their centuries-long history in Arab and Muslim countries prior to their forced expulsion in the wake of the Middle East conflict.”

“This MOU legitimizes the confiscation of Jewish property seized by Libya’s government when Jews were forced from the country. It is therefore necessary to ask why the US government would put faith in Libya, a regime that has shown blatant contempt for the rights of Jews and other minorities, to act as the protector of the heritage of minority and exiled peoples.”

In 2023: We will partner with other organizations to support legislation to ensure that import restrictions under the Cultural Property Implementation Act reflect the concerns of displaced religious and ethnic minorities in the MENA region, Turkey, Armenia, Central Asia and China.

In 2020, a bill requiring antiquities dealers to follow the anti-money laundering provisions of the Bank Secrecy Act to report to the Treasury Department’s Financial Crimes Enforcement Network, was included in the National Defense Authorization Act, making antiquities dealers subject to many of the same reporting rules as banks. Congress suggested that the regulations could vary by the size of the business, the size of the transaction, the location of the transaction—and how the dealer would identify the seller or buyer. A U.S. Department of the Treasury Report issued at the beginning of 2022 found that the art trade in general posed little threat of money laundering compared to real estate, trusts, and other ways of transferring assets. We are still waiting to learn how the final FINCEN rules will apply. In 2022, we continued to provide research to ensure that regulators and legislators have accurate data on the art trade in order to promote a responsible, lawful circulation of art.

The Committee for Cultural Policy works to ensure that international organizations adopt realistic, enforceable models for a responsible, lawful art market. We encourage the building of safeguards for the interests of religious and ethnic minorities in foreign nations and in the diaspora. CCP participated in UNESCO hearings and submitted extensive testimony on 2022 draft Model Provisions. We alerted key stakeholders to this attempt to replace the 1970 Convention’s aspirations for global circulation of art with an exclusively national-ownership focus and encouraged diaspora and minority organizations to submit testimony as well.

Among other serious concerns, the Model Provisions would:

CCP’s TrustLaw project produced nine lengthy, independent research papers on cultural property laws with legal teams from China, Nigeria, Peru, the United Kingdom, India, Turkey, Italy, Bulgaria and the USA. In 2023, we will update the United States volume to cover changes in law and policy including FINCEN and AML, MOU expansions, and significant changes to laws on Native American art.

We are currently researching law, enforcement, and public policy inside Afghanistan. In 2023, we will add a new volume on Afghanistan & Pakistan to the series. 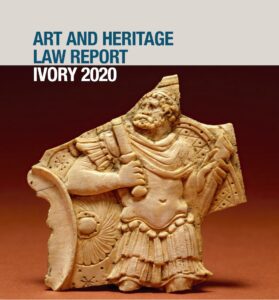 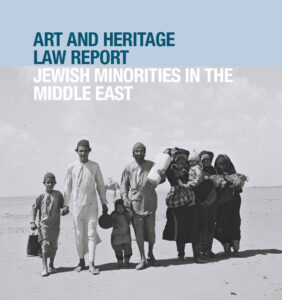 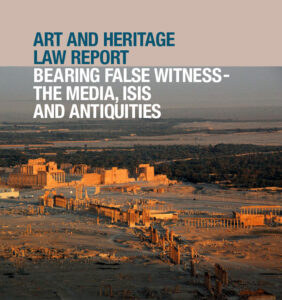 CCP’s Art and Heritage Law Reports address key issues in politics and media, human rights, and environmental policy. The series includes Ivory 2020, by Olivia Franklin, which provides an overview on the international framework on ivory, from ancient to antique and modern, in order to provide guidance on what can and cannot be imported, exported, traded or inherited. Jewish Minorities in the Middle East, by Katherine Brennan and Kate Fitz Gibbon discusses the pervasive pattern of abuse of both human and property rights of religious and ethnic minorities in the Middle East. Bearing False Witness: The Media, ISIS and Antiquities, 2017, by Katherine Brennan and Kate Fitz Gibbon examines the reflexive repetition of a false narrative about a multi-billion-dollar illegal market.

CCP is incredibly productive for its cost. We use less than 2% for fundraising, all by internal staff and volunteers. Our funds are used directly each year for delivering testimony in domestic and international venues, research and writing, and publishing Cultural Property News website content, the CPN Newsletter, Global Art & Heritage Law Series and Art & Heritage Law reports.

How can you help? Donate!

You can contact us directly for more donation information.

The Committee for Cultural Policy Inc. was established in 2011 as a 501(c)(3) non-profit public charity. Your gift may qualify as a charitable deduction for federal income tax purposes.

Please consult with your tax adviser or the IRS to determine whether your contribution is deductible under current law.